By 2023, Brazil will have the capacity to generate 22.4 gigawatts of wind power, the government’s Energy Research Agency said.

Brazil, the second-largest hydroelectric generator in the world, will expand the use of wind energy over the next ten years as the worst drought in decades raises concerns over the stability of hydro power. 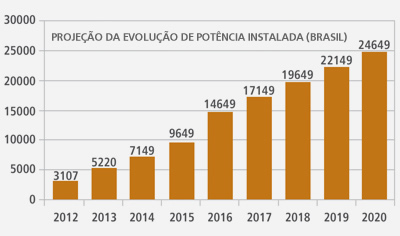 To reach that target, Brazil plans to buy 17 gigawatts of wind power over the next decade. Wind will supply 11.5 percent of the country’s power, up from 3 percent now, while hydro power’s share will fall to 59.7 percent from 66.9 percent.

Blackouts and energy rationing prompted Brazil to begin adding wind farms to its power mix in 2003 when hydroelectric generation accounted for 96 percent of energy capacity, Bloomberg New Energy Finance data shows. As a result of government incentives and power auctions in which developers bid down costs, the country had the world’s cheapest wind energy in 2012.

“This reliance on one resource for most of the country’s electricity generation, combined with the distant and disparate locations of its population centers, has presented electricity reliability challenges,” the U.S. Energy Information Administration said in a report in June.

The use of solar power is also expected to rise. By 2023, Brazil will have 3.5 gigawatts of solar capacity producing about 1.8 percent of the country’s energy, Mauricio Tolmasquim, president of the Energy Research Agency, said in a phone interview in July.