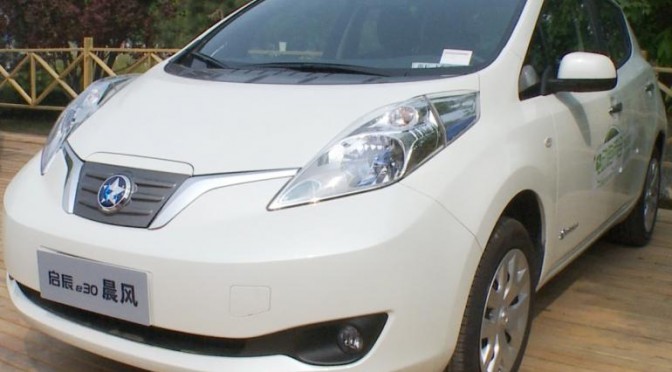 The Venucia e30 is ready to roll in China. The locally manufactured version of the Nissan Leaf is part of Nissan’s plan to take 20 percent of China’s EV market share by 2018.

After unveiling the Chinese version of the world’s best-selling electric car earlier this year, Nissan and its Chinese partner on Wednesday launched the Venucia e30 in China, becoming the second foreign automaker after Tesla Motors Inc. (NASDAQ:TSLA) to penetrate the Asian giant’s electric vehicle market. The Chinese government recently began offering incentives to encourage wider embrace of EVs as it attempts to reduce harmful emissions in its smog-choked cities, and the domestically manufactured Venucia e30 could benefit from this policy.

Nissan says the Venucia e30, which is based on the Nissan Leaf platform, has a starting price of 267,800 yuan (about $43,700) and will be made at a factory in the southern industrial city of Guangzhou where Nissan operates a plant with its domestic partner Dongfeng Motor Co., China’s second-largest car company. The company claims the electric Venucia (known in China as the “Qi Chen”) gets nearly 109 mpc (miles per charge).

In July, Xinhua News agency reported that five Chinese government departments and ministries announced 30 percent of all new government-vehicle purchases between 2014 and 2016 would be electric cars. China is also waiving a 10 percent sales tax on EV purchases.

While domestic EV makers like BYD Auto Co. Ltd. stand to benefit the most from the policy, Nissan Motor Co. Ltd. (TYO:7201) is hoping its relationship with Dongfeng and the popularity of the Leaf in the niche global EV market will help it grab 20 percent of the Chinese electric car market by 2018, according to Bloomberg.

Germany’s Center for Solar Energy and Hydrogen Research (ZSW) said in March that global EV sales (all-electric vehicles, excluding plug-in hybrids) doubled last year, to about 400,000 and that by 2016 there would be a million of the zero-exhaust vehicles on the world’s roads. About a fourth of all EVs (100,000) are Nissan Leafs as of the start of 2014.

If EVs are going to make a dent in vehicular exhaust emissions, they will need to replace gas-burners at a much faster rate.