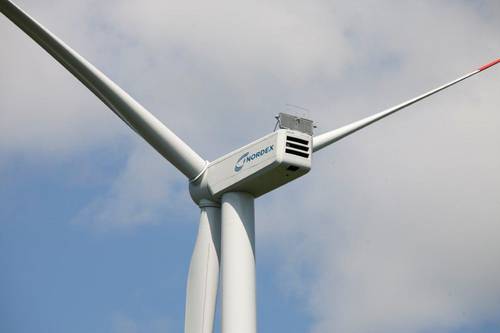 Nordex has received its first contract from Lithuania and will be supplying eight N117/3000 wind turbines for the “Jurbarkas” wind farm from spring 2015.

The wind farm is located close to the town of the same name in an agricultural region in the western part of the country around 50 kilometres from the Baltic Sea.

It is characterised by average wind speeds of more than 7 m/s, making the N117/3000 Generation Delta turbines on 120-metre towers the perfect choice for “Jurbarkas”. Starting in November 2015, the 24-MW wind farm will be producing at least 80 GWh of clean electricity. The contract also includes the provision of a Premium Service by Nordex over 15 years. Accordingly, Nordex will be establishing a service point close to the wind farm.

The project developer for “Jurbarkas” is Eurakras, owned 86% by Renagro and 14% by Baltcap. Private equity company Renagro invests in energy, real estate and agricultural projects. It currently already operates 6 MW wind farms and some smaller wind sites in Lithuania. Baltcap is a leading private equity and venture capital investor in the Baltic countries and has been active in the region since 1995.

“I am thrilled that we have now also entered the Lithuanian market. What is particularly pleasing is that we will again be installing N117/3000 Generation Delta turbines. This makes Jurbarkas a further reference project for Generation Delta for locations with medium wind speeds,” says Lars Bondo Krogsgaard, a member of Nordex’s Management Board.

“We believe Nordex offers with the N117/3000 turbine the right choice for our site with a good ratio of price versus estimated production. Bringing a new wind turbine supplier into the market will enhance competition and be beneficial for the market in a long run. I’d like to thank Nordex for their good customer attitude and fluent negotiations during the project run-in phase,” says Aleksandr Spiridonov, managing director of Eurakras.