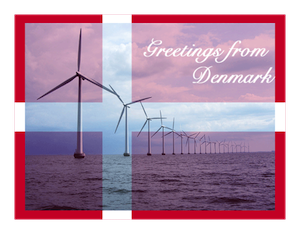 Wind power provided a record 41.2% of Denmark’s electricity consumption in the first half of 2014, power grid operator Energinet.dk said in its half-year report published Tuesday.

“This is a record,” said Energinet.dk. “The high share is partly due to more wind than usual, and partly due to a 650-megawatt growth in wind power capacity in 2013.”

Wind energy accounted for 33.2% of the country’s energy consumption in 2013, out of an annual electricity consumption of 33.5 terawatt hours. Boosted by stable subsidies for renewable energy, Denmark has so far installed more than 5,000 wind turbines with a total capacity of 4.8 gigawatts, according to the Danish Energy Agency.

Danish wind power records are also world records, as no other country has a larger wind power capacity in proportion to power consumption, according to Energinet.dk. Denmark has a target of weaning itself completely off coal, oil and gas by 2050.

“The high wind power share, which during some nightly hours significantly exceeded 100%, didn’t challenge Energinet.dk in running the electricity grid and balance power demand and power production,” the company said.

Denmark’s grid is flexible because of the country’s conventional power plants and grid connections to other countries, which helps the operator to balance supply and demand.

“However, this will be challenged by expectations that several conventional power plants will be shut down, while there will be higher capacity of intermittent energy sources,” said Energinet.dk.

In January, wind power output set a new monthly record, providing 61.7% of the country’s electricity consumption. The previous high was 54.8% in December 2013.