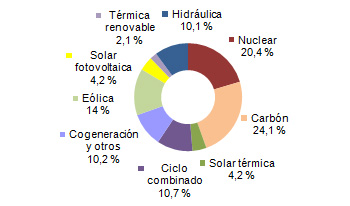 As much as 52.9% of the total energy output in Spain came from technologies with no carbon dioxide (CO2) emissions, REE added.

In terms of the different sources of renewable energy generation, wind energy in the country had the biggest share, accounting for 14% of the total.

As for the accumulated January to August period, the total electricity demand in the country reached 162,345 GWh, down 1.4% year-on-year.