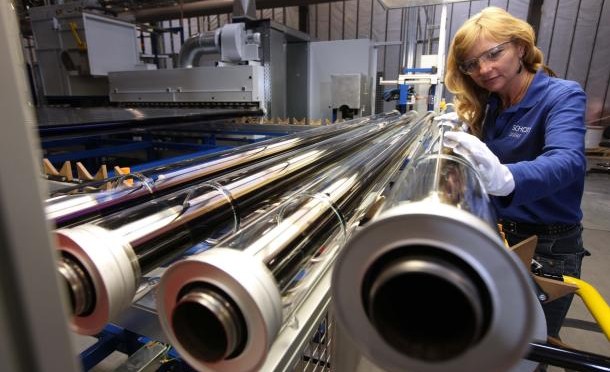 SCHOTT Solar CSP GmbH will be reorganizing its production setup for Concentrated Solar Power receivers. Focus shifts to the glass-metal sealings and R&D in Mitterteich, whereas the receiver production will continue in Spain

SCHOTT Solar CSP GmbH will be reorganizing its production setup for solar receivers. In Mitterteich, focus will shift to the glass-metal sealings – one of the key components of the receiver and one of the USP’s of SCHOTT Solar CSP. The receiver will continue to be manufactured in Aznalcóllar, close to Sevilla, Spain. Production in Mitterteich will be discontinued indefinitely. Should demand once again rise, then production can be reactivated.

This repositioning will affect about 50 employees in Mitterteich. The company is currently looking at how it might be able to retain employees for other business segments, with Mitterteich as the preferred location of continued employment. SCHOTT Solar CSP is also in constant talks with the workers’ council. The R&D work for solar receivers, as well as pilot production for new and customized products in Mitterteich, will remain in operation.

Receivers from SCHOTT Solar CSP are key components in large-scale power plants based on parabolic trough technology that generates electricity from solar energy. The technology is particularly efficient in regions with high direct solar irradiation and is capable of supplying entire cities with power. The company is positioned as the market and technology leader for receivers and plays a vital role in the advanced development in the industry.

Dr. Nikolaus Benz, managing director of SCHOTT Solar CSP, sees the repositioning justified as he adds: “The worldwide market for concentrated solar power plants is currently shifting from established and developed markets like Spain and the USA to new markets like India, South Africa, the MENA-region, as well as China. Saudi Arabia, in particular, has announced an ambitious plan to reach a concentrated solar power capacity of 25 gigawatts that is to be met by the year 2032. The demand from the developing markets, however, is still not high enough to close the gap left by decreased demand in the USA and Spain.” Experts expect an increase in demand in the developing nations in the coming years.

SCHOTT is an international technology group with 130 years of experience in the areas of specialty glasses and materials and advanced technologies. SCHOTT ranks number one in the world with many of its products. Its core markets are the household appliance, pharmaceutical, electronics, optics and transportation industries. The company is strongly committed to contributing to its customers’ success and making SCHOTT an important part of people’s lives with high-quality products and intelligent solutions. SCHOTT is committed to managing its business in a sustainable manner and supporting its employees, society and the environment. The SCHOTT Group maintains close proximity to its customers with manufacturing and sales units in 35 countries. Its workforce of 15,400 employees generated worldwide sales of 1.84 billion euros for the 2012/2013 fiscal year. SCHOTT AG, with its headquarters in Mainz (Germany) is owned by the Carl Zeiss Foundation.