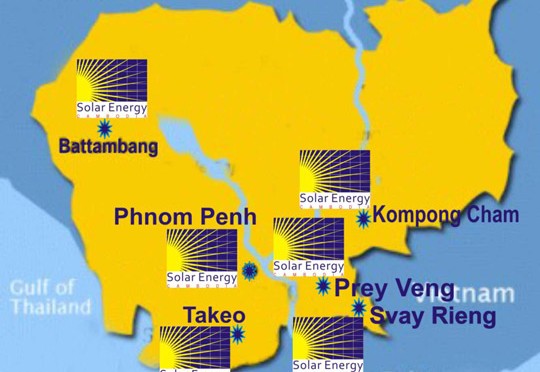 The Willowbrook Company, a New York-based renewable energy development company, is seeking support from Cambodia to build a 250-megawatt solar power plant, the Cambodian Ministry of Commerce said in a statement Friday.

Edward J.Sappin, visiting chief executive officer of the Willowbrook Company, urged the support from Cambodian Minister of Commerce Sun Chanthol for the mega-project during a meeting on Wednesday, the statement said. “During the meeting, Sappin presented to the minister the Reah Solar power plant project with the capacity of 250 megawatts,”it said. “This 500-hectare solar power plant in Cambodia is uniquely the first of its kind in renewable energy investment in Cambodia and Asia.”

Once built and operational, the plant will be capable of producing electricity of 394 million kwh per year, it added. “Sappin is seeking the approval from the Cambodian government to proceed with the investment of this project, which is estimated to cost around 400 million U.S. dollars,”the statement said, adding that if approved, the project is scheduled to commence in 2015 and is expected to be completed by the end of 2017.

Sun Chanthol expressed his support for this unique renewable energy investment in Cambodia and pledged to give his endorsement when it is submitted to the Council for the Development of Cambodia for consideration.