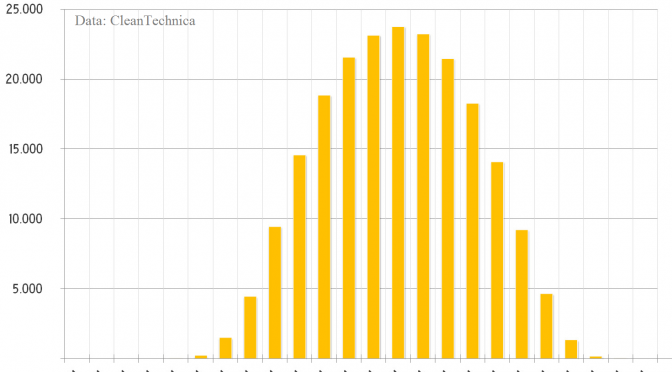 On Sunday, July 7th, 2013, a day of unbroken sunshine and low demand, solar PV generated approximately 200 gWh of power, over 20% of Germany’s total electricity production for the day. (I’m indebted to CleanTechnica for the bar graphs): And because peak sunshine and peak demand are more or less coincident on summer Sundays in Germany there was no serious problem admitting all of this solar electricity to the grid: There was, however, one minor difficulty. The surge of solar power caused generation to exceed consumption for about ten hours and as a result about 13% of it, shown by the orange bars at the bottom of the graph above, had to be exported to other countries in the Central West Europe market region. The graph below moves the orange bars up to the top to illustrate the size of the surplus relative to consumption: Surpluses like this are of course not large enough to cause a problem, and can in fact be eliminated simply by backing off a little on other forms of generation. But solar supplied only 5.7% of Germany’s total electricity generation in 2013, and if this is as far as it ever gets it’s not going to move Germany very far along the path to sustainable energy. Solar has to get much bigger to do that, and here we will briefly examine some of the obstacles that stand in its way.

How much bigger does solar have to get? Market analysts have predicted that it could ultimately supply 25% of Germany’s electricity, so we’ll use that as the target. Meeting it would require scaling up by a factor of 4.4 relative to 2013, with annual solar generation increasing from ~30TWh to ~130TWh and installed solar capacity from ~35GW to ~ 150GW. We can’t of course predict what consumption will be when and if this happens, but if 150gW of solar PV capacity had been in place on July 7th, 2013, this is what the generation mix would have looked like: There would have been huge oversupply of solar electricity. Solar would have generated ~800 gWh, representing about half of total German electricity generation for the day, but only about 200 gWh of it could have been admitted to the grid, barely more than was admitted to the grid in 2013, all other things being equal. So in this example expanding PV capacity by a factor of 4.4 would have increased solar penetration by a effectively zero. (Note that the numbers given here and later in the text are scaled off graphs and are therefore approximate, although this does not impact the basic conclusions.)

However, conventional generation would presumably have been cut back to accommodate as much of the solar surplus as possible, and the graph below summarizes the impacts of doing this. By cutting conventional generation to zero between 8 am and 5 pm (wind, hydro and biomass generation are left unchanged) about 450 gWh of solar, representing about 45% of total generation, could have been admitted to the grid. But this still leaves a surplus of about 350 gWh: A rough calculation based on these numbers indicates that if Germany installs enough PV capacity to supply 25% of its annual electricity consumption, and if no storage capacity or other means of matching production to load is available, and if the load curve remains substantially the same as it is now, about 20% of the solar electricity would have to be “spilt”, meaning that Germany would actually obtain only 20% of its electricity from solar. Additional PV capacity could be added to increase the solar contribution, but most of the added generation would get wasted because there would be nowhere to send it. Clearly the approach of expanding PV generation without anywhere to store the surplus power is not viable.

The question therefore becomes, is there any way of storing solar power surpluses for short-term re-use? Not with solar PV using existing storage technology. But it could be done with concentrated solar power (CSP), which uses heliostats to reflect solar energy into heat-retaining reservoirs containing a fluid (usually molten salt) that delivers steam to conventional turbines both when the sun is shining and when it isn’t. CSP plants can in fact act as load-following or even baseload capacity if enough storage is available, and this capability has been demonstrated at the Gemasolar CSP plant in Spain, which last year completed 36 days of continuous 24/7 operation. (Even Forbes was enthusiastic.)

So why aren’t there more CSP plants? Because a) they aren’t suitable for domestic use and b) they are much more expensive than solar PV plants.

But capital costs are actually not all that much higher. The Gemasolar plant (technical details here) is an example. It has a rated capacity of 19.9 mW and cost 230 million euros to build, which works out to 11,500 euros per installed kW, roughly five times the cost of a 19.9mW PV plant. Ofsetting this, however, is the fact that Gemasolar produces ~110 gWh a year, about three times as much as a 19.9 mW PV plant would produce, and at a much higher load factor (officially 63%, with recent estimates of up to 75%).

How can a solar plant have load factors this high? Because 19.9 mW is the capacity of the turbines, not the capacity of the solar array. The heliostats that melt the salt that produces the steam that drives the turbines in fact have a capacity of 76 mWe (304,750 sq m at 2,172 kWh/sq m/yr), giving an installed cost of slightly over 3,000 euros/kWe, not that much higher than the cost of an equivalent PV array. The 17% load factor calculated using the 76mW number is also comparable to the ~18% average for PV plants in Spain.

On a levelized cost basis, however, CSP electricity is about twice as expensive as PV electricity, with the Fraunhofer Institute estimating levelized costs at 6-10 euros/kWh for PV and 14-19 euros/kWh for CSP. But as Fraunhofer points out: “the advantage of the ability to store energy and the dispatchability of CSP …. was not taken into account.” How big an advantage is this? In the case of Germany very big indeed, because with CSP it could generate 25% of its annual electricity from solar with effectively no spillage at all.

So what’s not to like about CSP? Three things. First, it doesn’t work very efficiently at 50 degrees latitude, but for the purposes of analysis we can consider Germany as a generic example that would apply to sunnier countries closer to the Equator, such as the US.

Second, CSP storage can smooth out only short-term fluctuations. It can’t smooth out the huge seasonal changes in solar output that occur at higher latitudes and which are usually anticorrelated with demand. The next two plots of total monthly electricity generation and solar generation in Germany illustrate the problem (data from Fraunhofer): Even with solar providing only 5.7% of Germany’s electricity, as it did in 2013, Germany would have to install about 8 tWh of storage to convert the seasonal fluctuations in solar output into continuous baseload generation, and at the 25% level it would need over 30 tWh. Installing this much storage capacity in Germany or anywhere else for that matter is far beyond the bounds of feasibility (current worldwide pumped storage capacity amounts to only 1 tWh). With 25% annual CSP generation Germany would therefore get 40-50% of its electricity from solar in the summer when it least needs it but only about 5% of its electricity from solar in the winter when it needs it most. So while expanding CSP capacity will have a positive overall impact on Germany’s renewable generation mix it will do little or nothing to reduce the requirement for large amounts of conventional backup generation. Note: Some of the winter shortfall could theoretically be filled by wind power, which is positively correlated with demand over the seasonal cycle in Northern Europe, but integrating large quantities of wind power with the grid poses problems of its own.