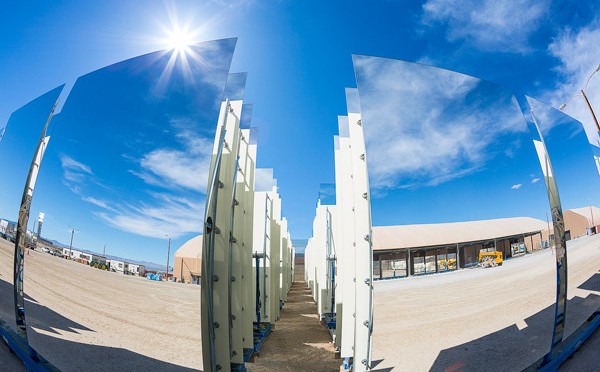 New research outlines the path to a possible future for California in which renewable energy creates a healthier environment, generates jobs and stabilizes energy prices.

A Stanford study outlines how power from facilities such as the Ivanpah Concentrated Solar Power in California’s Mojave Desert can be part of the state’s renewable energy future.

Imagine a smog-free Los Angeles, where electric cars ply silent freeways, solar panels blanket rooftops and power plants run on heat from beneath the Earth, from howling winds and from the blazing desert sun.

A new Stanford study finds that it is technically and economically feasible to convert California’s all-purpose energy infrastructure to one powered by clean, renewable energy. Published in Energy, the plan shows the way to a sustainable, inexpensive and reliable energy supply in California that could create tens of thousands of jobs and save billions of dollars in pollution-related health costs.

“If implemented, this plan will eliminate air pollution mortality and global warming emissions from California, stabilize prices and create jobs — there is little downside,” said Mark Z. Jacobson, the study’s lead author and a Stanford professor of civil and environmental engineering. He is also the director of Stanford’s Atmosphere/Energy Program and a senior fellow with the Stanford Woods Institute for the Environment and the Precourt Institute for Energy.

Jacobson’s study outlines a plan to fulfill all of the Golden State’s transportation, electric power, industry, and heating and cooling energy needs with renewable energy by 2050. It calculates the number of new devices and jobs created, land and ocean areas required, and policies needed for infrastructure changes. It also provides new estimates of air pollution mortality and morbidity impacts and costs based on multiple years of air quality data. The plan is analogous to one that Jacobson and other researchers developed for New York state.

The study concludes that, while a wind, water and sunlight conversion may result in initial capital cost increases, such as the cost of building renewable energy power plants, these costs would be more than made up for over time by the elimination of fuel costs. The overall switch would reduce California’s end-use power demand by about 44 percent and stabilize energy prices, since fuel costs would be zero, according to the study.

It would also create a net gain, after fossil-fuel and nuclear energy job losses are accounted for, of about 220,000 manufacturing, installation and technology construction and operation jobs. On top of that, the state would reap net earnings from these jobs of about $12 billion annually.

According to the researchers’ calculations, one scenario suggests that all of California’s 2050 power demands could be met with a mix of sources, including:

The study states that if California switched to wind, water and sunlight for renewable energy, air pollution-related deaths would decline by about 12,500 annually and the state would save about $103 billion, or about 4.9 percent of the state’s 2012 gross domestic product, in related health costs every year. The study also estimates that resultant emissions decreases would reduce global climate change costs in 2050 — such as coastal erosion and extreme weather damage — by about $48 billion per year.

“I think the most interesting finding is that the plan will reduce social costs related to air pollution and climate change by about $150 billion per year in 2050, and that these savings will pay for all new energy generation in only seven years,” said study co-author Mark Delucchi of the University of California, Davis.

“The technologies needed for a quick transition to an across-the-board, renewables-based statewide energy system are available today,” said Anthony Ingraffea, a Cornell University engineering professor and study co-author. “Like New York, California has a clear choice to make: Double down on 20th-century fossil fuels or accelerate toward a clean, green energy future.”

Currently, most of California’s energy comes from oil, natural gas, nuclear power and small amounts of coal. Under the plan that Jacobson and his fellow researchers advance, 55.5 percent of the state’s energy for all purposes would come from solar, 35 percent from wind and the remainder from a combination of hydroelectric, geothermal, tidal and wave energy.

To ensure grid reliability, the plan outlines several methods to match renewable energy supply with demand and to smooth out the variability of wind, water and sunlight resources. These include a grid management system to shift times of demand to better match with timing of power supply; and “over-sizing” peak generation capacity to minimize times when available power is less than demand. The study refers to a previously published analysis that demonstrated that California could provide a reliable grid with nearly 100 percent clean, renewable energy.

The footprint on the ground for the new energy infrastructure would be about 0.9 percent of California’s land area, mostly for solar power plants. The spacing area between wind turbines, which could be used for multiple purposes, including agriculture and rangeland, is another 2.77 percent.

“I believe that with these plans, the people and political leaders of California and New York can chart a new way forward for our country and for the world,” said study co-author Robert Howarth, a Cornell University professor of ecology and environmental biology.

The study’s authors are developing similar plans for all U.S. states. They took no funding from any interest group, company or government agency for this study.

The above story is based on materials provided by Stanford University. The original article was written by Rob Jordan. Note: Materials may be edited for content and length.