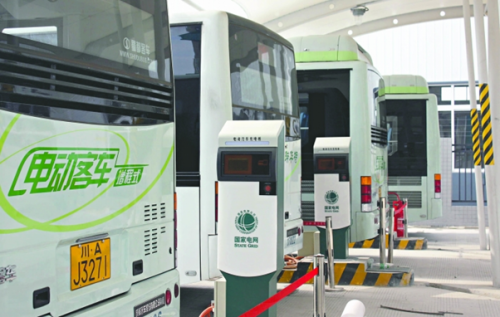 The cooperation creates a city-wide standardized charging system for electric and electric hybrid buses that can charge buses quickly through an automatic roof-top connection system at bus stops or through cabled charging systems overnight.

ABB and Volvo will contribute with their respective expertise in power grids and e-buses to further develop e-bus fast-charging standards, such as communications protocols for infrastructure, electrical grids and e-buses.

“We are very pleased to partner with a global transportation industry leader that shares our vision of e-mobility in line with ABB’s commitment of power and productivity for a better world,” said Pekka Tiitinen, head of ABB’s Discrete Automation and Motion division. “Urbanization is at a historic high and is stretching transport infrastructure of cities around the world. Our collaboration will help support sustainable and cost-efficient transportation solutions to meet rising commuter demand.”

The partnership is focused squarely on standardization of automatic e-bus fast charging, including the communications protocol between the infrastructure charging solution and e-bus, the electrical interface and specifications for the rooftop automatic connection system (ACS).

“We are delighted to enter into partnership with ABB. Together, we have a complete and competitive offer to cities around the world that want to switch to a sustainable public transport system,” said Håkan Agnevall, President Volvo Buses. “Electric hybrid buses and full-electric buses are tomorrow’s solution for urban public transport.”

Volvo Buses launched its first hybrid bus in 2009 and has delivered nearly 1,600 hybrids to 21 countries. Its first fully electric bus will be launched in June 2015 as part of the ElectriCity project in Gothenburg, Sweden.

ABB has delivered over 1,500 DC fast charging systems for passenger vehicles worldwide since 2010, rolling out charging networks for automotive, utility, government and retail customers including nationwide networks in the Netherlands, Estonia and Denmark.

The first joint project will be the implementation of Volvo Electric Hybrids and ABB’s automatic e-bus chargers in the Luxembourg public transport system, where as many as 12 Volvo Electric Hybrid buses operated by Sales-Lentz will be running on existing lines by 2015.

The project is integrated into Luxembourg’s Mobility Network linking different mobility projects in the western European country to exploit synergies and develop common visions for the mobility of the future.

ABB (www.abb.com) is a leader in power and automation technologies that enable utility and industry customers to improve their performance while lowering environmental impact. The ABB Group of companies operates in around 100 countries and employs about 150,000 people.

Volvo Buses (http://www.volvobuses.com) is one of the world’s leading bus manufacturers, with a strong focus on vehicles and systems for long-term sustainable public transport. Volvo Buses is part of Volvo Group, one of the world’s leading manufacturers of trucks, buses and construction machines as well as drive systems for marine and industrial applications.