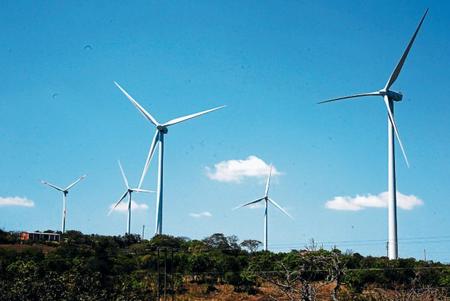 Honduras-based Grupo Terra awards two companies turnkey contract to commission facility equipped with 25 Gamesa G90 wind turbines with a unit capacity of 2 MW each.
IBERDROLA subsidiary strengthens foothold in wind power market in Honduras, having already commissioned largest wind farm in Central America (Cerro de Hula wind farm, capacity over 100 MW) last year.
IBERDROLA INGENIERÍA and Gamesa have entered into an agreement with Honduras-based Grupo Terra to build the San Marcos wind farm in a turnkey project to cost €62 million.
This wind power facility will have a capacity of 50 megawatts (MW) and it will be located in the municipality of San Marcos de Colón, 140 kilometres south of the Honduran capital Tegucigalpa and close to the border with Nicaragua.
IBERDROLA’s subsidiary firm will be in charge of engineering, procurement, construction and start-up of the wind farm. It will also build an electrical substation and a 40 km power line for uploading energy to the grid.
Gamesa will be in charge of supplying the turbines for this wind power facility. To be more specific, the company will deliver 25 G90 model wind turbines with a unit power of 2 MW each, with a hub height of 78 metres and a rotor diameter of 90 metres.
The San Marcos wind farm will boost progress in the area where it will be located, as it will be capable of meeting the electricity needs of around 100,000 Honduras homes and of creating some 200 jobs during the construction process.
The owner of the wind farm will be Grupo Terra, the largest private energy project operator in Central America.  With headquarters in Tegucigalpa, this group has extensive experience in the construction, operation, maintenance and repair of renewable and thermal energy projects.
IBERDROLA subsidiary is therefore strengthening its foothold in the wind power market in Honduras, having already commissioned the largest wind farm in Central America (Cerro de Hula wind farm, capacity over 100 MW) last year
Cerro de Hula was also built in a consortium with Gamesa. It is located around 24 kilometres south of Tegucigalpa, in the municipalities of San Buena Ventura and Santa Ana. The owner of this facility is Mesoamérica Energy, a company specialising in the development of renewable energy projects in Central America, via its local subsidiary Energía Eólica de Honduras (EEH).
IBERDROLA  INGENIERÍA is currently one of the most international companies in its sector, with operations in almost 30 countries. The main activity of this subsidiary is the completion of engineering and construction work for other companies in the group and for third parties, in the areas of generation, nuclear energy, networks and renewable energies.
http://santamarta-florez.blogspot.com.es/2014/07/spains-iberdrola-gamesa-to-build-wind.html
http://www.evwind.com/2014/07/09/iberdrola-y-gamesa-construiran-un-parque-eolico-en-honduras/?utm_source=rss&utm_medium=rss&utm_campaign=iberdrola-y-gamesa-construiran-un-parque-eolico-en-honduras