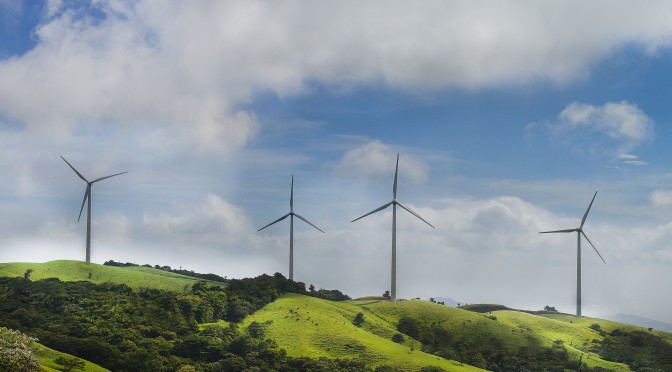 The installation, owned by a consortium in which ACCIONA holds 65% and local partner Grupo Ecoenergía the remaining 35%, represents a total investment of US $125 million (EUR 92 million at current exchange rates).

The wind farm is the result of a contract awarded to the consortium for the purchase and sale of electricity from a wind farm with a capacity of up to 50 MW, in a tender previously been announced by the Instituto Costarricense de Electricidad (ICE). The power generated by the wind farm will be sold to the ICE under a 20-year contract.

The facility consists of thirty-three AW 77/1500 turbines that use ACCIONA Windpower technology. Each has a capacity of 1.5 MW and a rotor diameter of 77 meters, mounted on 80-meter-high steel towers.

The wind farm is located in the municipality of Tilarán (Guanacaste province) in north-west Costa Rica, on a site with high wind potential that will produce of over 200 million kilowatt-hours (kWh) per year. This level of production is equivalent to the consumption of 80,000 households in Costa Rica and will avoid the emission of around 192,000 metric tons of CO2 to the atmosphere from conventional coal-fired power stations.

The Chiripa wind farm will mean a boost for the wind power development of Costa Rica, which ended 2013 with an accumulated capacity of 249 MW, and it will contribute to the government’s strategic objective of reducing the country’s carbon footprint.

During the construction of the wind farm ACCIONA implemented a social management plan aimed at the surrounding population, in the form of incentives for companies carrying out the civil works to contract local employees and other actions designed to cover the main needs of the communities that could be done with the available means from the construction works.

With this wind farm ACCIONA Energía has reached 2,364 renewable megwatts in operation owned by the company outside Spain. Of this figure, 2,254 MW correspond to wind power, 64 MW to -thermal solar power and 46 MW to photovoltaic energy.

The company is currently building in South Africa a 138 MW wind farm – it will enter service in the first semestre of 2015 – and a 94 MWp photovoltaic plant (nominal capacity of 75 MW) that is expected to start operating before the end of the year.

ACCIONA Energía is also constructing a 45 MW wind farm in Chile (100% owned by the company) that will enter service towards the end of 2014. When it is completed, the company will end the year with owned installations in 14 countries apart from Spain.