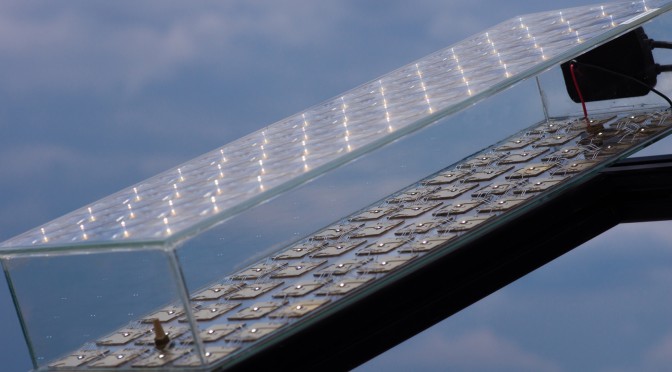 The Fraunhofer Institute for Solar Energy Systems ISE has been successfully developing concentrator photovoltaic (CPV) technology for many years. In this technology Fresnel lenses are used to bundle sunlight and focus it onto miniature, highly efficient solar cells. The FLATCON® module technology originates from Fraunhofer ISE and is continually under further development at the Institute. Now with their newest CPV module technology, the Freiburg researchers announce a world record module efficiency of 36.7 %, achieved by adapting the concentrating lens to a new solar cell structure. The high module efficiency was measured under Concentrator Standard Testing Conditions, or CSTC, and marks the best value ever achieved for a photovoltaic module.

Decisive in this achievement was Soitec’s newly developed four-junction solar cell based on the wafer bonding technology and developed in cooperation with Fraunhofer ISE. Recently this four-junction solar cell could be implemented into the Institute’s FLATCON® module concept. The module aperture area, defined as the surface area of the module exposed to light, is 832 cm². The sunlight is concentrated by a factor of 230 suns onto fifty-two 7 mm² miniature solar cells with the help of fifty-two 16 cm² Fresnel lenses. “Naturally we are incredibly excited about this high module efficiency,” says Dr. Andreas Bett, who has led the CPV research at Fraunhofer ISE over many years. For his efforts Bett has received many awards, among them the German Environmental Award 2012, together with Hansjörg Lerchenmüller of Soitec Solar.

“This success shows that the high efficiencies of Soitec’s novel four-junction solar cells can be transferred to the module level.”

Only several months ago, Fraunhofer ISE together with Soitec, the French research center CEA-Leti, and the Helmholtz Center in Berlin announced a new solar cell world record of 44.7 % under concentrated light. This record cell consisted of four sub-cells made up of the compound semiconductors GaInP, GaAs, GaInAs and InP respectively. In comparison to standard silicon solar cells, the manufacture of four-junction solar cells is more expensive so that up to now their terrestrial applications have been exclusively in concentrator systems.

Concentrator photovoltaic systems (CPV) are installed in sun-rich regions, where such systems produce solar electricity for less than 8 eurocents per kilowatt-hour.

Key to this technology is the solar cell efficiency and the concentrating optic. In the record module, the newly developed four-junction solar cell was combined with Fresnel lenses, which were manufactured by the industry partner ORAFOL Fresnel Optics based on a new design developed at Fraunhofer ISE. The successful transfer of this high module efficiency to commercially manufactured modules is expected within one to two years.