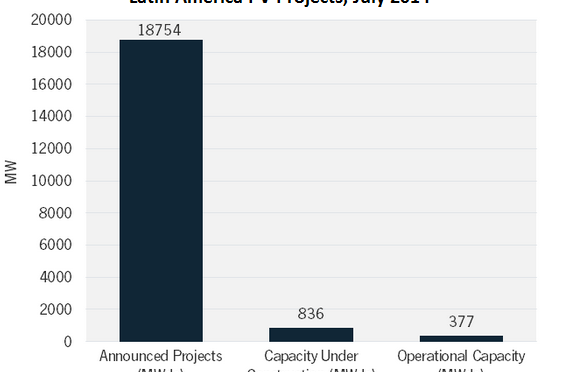 Additionally, over 50 megawatts came on-line in the past three months, bringing the regional total to 377 megawatts of operational large-scale PV.

After initially forecasting Mexico to come out on top of the region earlier this year, GTM Research revised its forecast downward due to pending legislation in the energy sector.

“It’s having an immediate chilling effect on the utility-scale market this year, as a number of major projects have been delayed.” said global solar analyst Adam James. “However, in the long term, the legislation will be a boon for the Mexican solar market. Everyone is just waiting for the new rules of the road.”

“The strong fundamentals in the Chilean market are finally translating into real results, as credible projects secure offtake agreements and lock in financing. But it’s not just quantity of megawatts that makes Chile so interesting. Chile is pioneering sustainable solar markets, and we are seeing many companies pursuing non-traditional business models for selling solar power, such as negotiating shorter-length or more flexible contracts and selling some, or all, power into the spot electricity market,” said James.

GTM Research forecasts that more than 1 gigawatt of PV will come on-line this year across Latin America, approximately seven times what was installed in the region in 2013. While on-grid residential and commercial markets will exceed 100 megawatts this year, the majority of demand in Latin America is from the utility-scale segment.