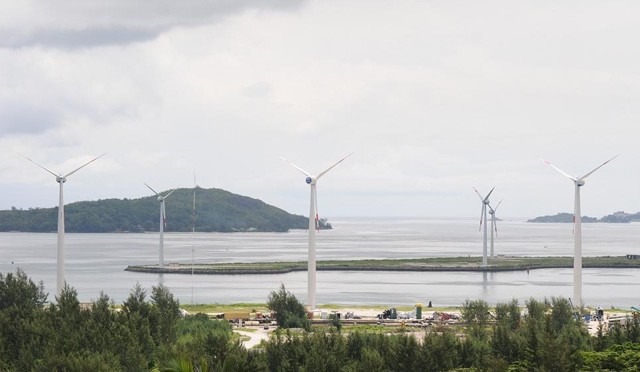 The tall wind turbines which can be seen on arrival into Port Victoria have been producing clean energy for the Seychelles islands for the last 12 months, as part of the Indian Ocean archipelago’s first large scale renewable energy project.

With a target of producing 5 percent of electricity generation from renewable energy sources by 2020, the Seychelles islands are nearly half way to meet their target, as the islands are producing 2.2 percent of energy consumed from wind power.

Consisting of eight giant wind turbines, the wind farm project is said to have been built to provide electricity to more than 2,000 homes.

According to PUC, the wind turbines are producing enough electricity to supply the intended 2,200 homes, surpassing expectations.

PUC’s Chief Executive Philip Morin told SNA that at any instant, the five turbines at Ile de Romainville and three at Ile du Port can each yield 750 kw each, making a total of 6,000 kw.

However that is not always the case, as output depends on wind velocity.

Morin said that turbine production runs into an average 8 million Kw/hour per year, compared to national energy need of 375 million kw/hour which means that the wind farm is presently meeting about 2.2 percent of total consumption.

That translates into a saving of Rs 24 million ($ 2 million) yearly for the national economy.

The project was funded by the Government of the United Arab Emirates, which delegated its energy company MASDAR to oversee the project, until it’s handing over to PUC in June 2013.

Morin said that the wind turbines, installed by the South Korean contractors, Unison, represent advanced state of the art technology and have been running very well.

“There have been no major issues, such as noise, vibration and killing of seabirds, fears expressed in some quarters, which have proved to be totally inaccurate.”

Morin said that since the corporation needs time to master the technology, three Koreans remain in Seychelles as part of the initial contract to help run the project until next year.

“These are not simple blades turning. It is rather complex and a bit of a challenge to work reliably,” he said.

Five PUC engineers and technicians who had gone to South Korea for training last year have since returned. The Korean engineers are also running classroom classes, with theory and practical sessions for other PUC personnel, three of whom will also be sent to Seoul soon for more advanced training.

In spite the wind farm being able to meet the intended 2.2 percent of Seychelles’ total consumption it is clear that more needs to be done and more can be done to tap into renewable energy to produce electricity for the island nation.

In an effort to make better use of the almost all year round sunshine in Seychelles, a new project to encourage more people to install photovoltaic systems to power their homes and businesses was launched in May providing for a 35 percent financial rebate to domestic and commercial entities alike on any PV system up to 3 kilowatt peak (kWp).