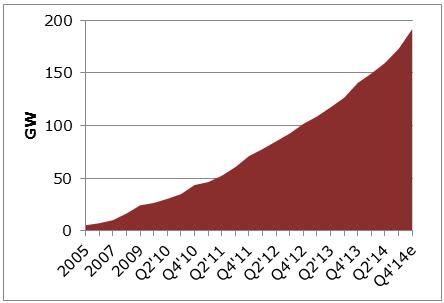 The global solar PV industry continues to show strong growth, with over 150 GW of solar PV installed across the world.

The industry has steadily grown over the past several years, increasing from an installed base of only 5 GW in 2005 to almost 200 GW forecast by the end of 2014.

This growth was led originally by European countries, which between 2005 and 2011 accounted for 60-85% of annual global demand. The last few years have seen steadily declining demand shares in Europe however, and in 2014 annual European demand is forecast to account for less than 25% of global demand while demand from the major Asian countries (China, India, Australia, Thailand, and Japan) is projected to account for over half of worldwide solar PV demand (up from 10% demand share in 2010).

This global demand growth has not developed in a vacuum and the changes, challenges, and opportunities in the solar PV industry have been discussed during the NPD Solarbuzz summer event series, kicking off at the “NPD Solarbuzz Seminar at PV America”, June 23rd, 2014 in Boston, and then heading to Seoul, Shanghai, and Taipei in July before ending the series at the NPD Solarbuzz North America PV event, August 6th, 2014 in San Jose.