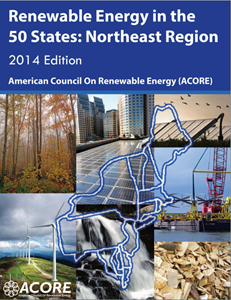 The Northeast Region Report, the first portion of the American Council On Renewable Energy’s (ACORE) 7th annual Renewable Energy in the 50 States report, was released today.

The first in a four-part series, this portion focuses on the renewable energy sector in the eleven Northeastern states plus the District of Columbia (ME, NH, VT, MA, RI, CT, NY, NJ, PA, DE, MD, DC), reviewing activity from 2013 to present.

The report is a review of state energy policies and programs, investment, and market openness as they relate to the current state of renewable energy and its potential for further growth.

“The Northeast Region has helped lead the reduction of carbon dioxide emissions in the U.S. over the past decade, driven by the Regional Greenhouse Gas Initiative (RGGI). RGGI has facilitated significant reductions in carbon dioxide and other emissions in participating states since it launched, while electricity prices declined,” said Michael Brower, ACORE’s President and CEO. “This success of RGGI heralds the promise of positive results from the U.S. Environmental Protection Agency’s new proposed Clean Power Plan rule, which will encourage the broader adoption of renewable energy in the Northeast to achieve the state-by-state CO2 emission reduction targets.”

The region added more than 800 MW of new, renewable energy capacity in 2013, mostly from solar power installations, with nearly $1 billion in asset finance, venture capital and private equity investment. Many states—notably New York and Massachusetts—maintained their renewable energy policy leadership, incentivizing even greater private sector investment in the industry. And while states across the U.S. have begun considering whether to limit or repeal their net energy metering policies, Vermont quadrupled its net metering cap in early 2014 with significant bipartisan support.

“With high electricity prices, a reliance on imported energy, and ongoing retirements of fossil-fueled power plants, the Northeast has strong incentives to develop local, renewable sources of energy,” explained Lesley Hunter, ACORE’s Research and Program Manager and lead author of the report. “To meet 21st century energy needs, Northeastern states need to assess and utilize all their renewable resource options, whether for centralized or distributed power generation, transportation fuels, or thermal energy, especially as technologies are becoming more cost-effective and widely adopted.”

Renewable Energy in the 50 States: Northeast Region provides an executive summary for each state on the status of renewable energy implementation at the state-level. Compiling financial, renewable energy resource potentials, and market and policy information in an easily-accessed, online format, the report is intended to be an executive summary for all who are interested in the highlights of each renewable energy sector in the states. Investment information in this report was provided by Bloomberg New Energy Finance.

ACORE’s 2014 Renewable Energy in the 50 States: Northeastern Region can be viewed here.

ACORE, a 501(c)(3) non-profit membership organization, is dedicated to building a secure and prosperous America with clean, renewable energy. ACORE seeks to advance renewable energy through finance, policy, technology, and market development and is concentrating its member focus in 2014 on National Defense & Security, Power Generation & Infrastructure, and Transportation.