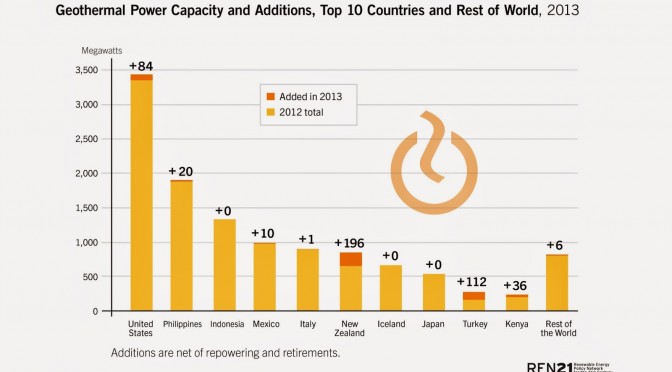 With EGP’s 34 plants, which have produced 5,301 GWh in 2013, Italy is fifth in the world and first in Europe for geothermal power generation.

With its installed capacity of 875 megawatts, Italy ranks fifth in the world and first in Europe as regards electricity generation from geothermal source.

This was found by “Another Kind of green”, a report compiled by Unicredit’s Infrastructures & Regulated Sectors.

A record that belongs to Enel Green Power, since the plants that EGP operates in Tuscany account for 100 percent of the country’s geothermal generation.

In this region, EGP manages 34 plants divided in the Geothermal Areas of Larderello, the oldest group of geothermal in the world, Radicondoli, Lago Boracifero and Piancastagnaio/Amiata.

According to data published by EGP, these 34 plants generated an unprecedented 5,301 gigawatt hours in 2013.

This production can meet 26 percent of the regional needs, equivalent to the annual consumption of more than two million households and can provide heat to some 9.000 customers, 25 hectares of greenhouses, dairies, while also providing energy to an important agricultural, gastronomic and touristic supply chain.

Moreover, Italy’s Q1 2014 show that geothermal electricity generation has grown an additional 2.7 percent compared with 2013, when theGeothermal Museum was inaugurated, the Piancastagnaio Refurbishment Plan was launched, it was decided that maintenance service workshops at Larderello would be used to inspect and repair the components of Enel Green Power’s plants in the world and a Memorandum of Understanding was signed with the Tuscany region aimed at creating linked geothermal industries.