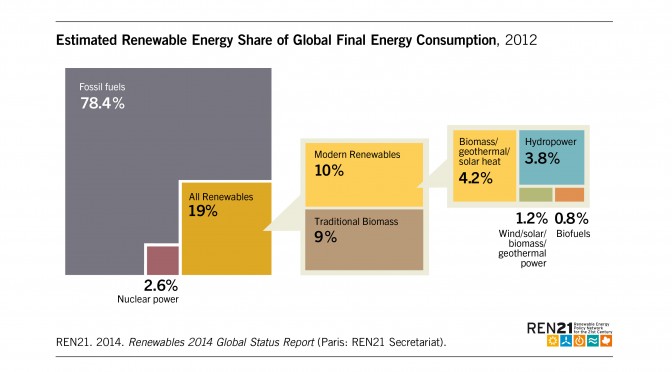 Renewable energy technologies set new installation records as their contribution to the global energy mix continued to climb in 2013. Renewable power capacity jumped more than 8 percent in 2013, accounting for over 56 percent of net additions and now has the potential to account for over a fifth of world electricity generation. These are some of the findings of the latest edition of the annual Renewables Global Status Report, released by the Paris-based Renewable Energy Policy Network for the 21st Century (REN21). The report is the product of a collaborative effort of an international network of more than 500 contributors, researchers, and authors.

“Renewable energy technologies have entered the mainstream,” says Worldwatch Institute Senior Fellow Janet Sawin, the report’s research director and lead author. “As awareness of the potential of renewables spreads around the world, and as these technologies continue to advance and prices fall, this impressive growth could further accelerate.”

Several renewable energy technologies registered strong showings in 2013. At least 39 gigawatts (GW) of new solar PV capacity was added worldwide throughout the year. Wind energy continues to be a strong global force despite a decrease from 2012, primarily due to a slowdown in the American market. More than 35 GW of wind power capacity was added in 2013, with wind alone now meeting 20 to more than 30 percent of annual electricity demand in countries such as Spain and Denmark. In addition to power generation technologies, heating and cooling from renewable sources such as modern biomass, solar, and geothermal account for a gradually rising share of final global heat demand, amounting to an estimated 10 percent.

“Solar PV had an extraordinary year, and the sector’s performance is an indication of exciting things to come,” says Sawin. “Even though global investment in solar PV was down 22 percent in 2013 in dollar terms, new capacity installations reached a record high, up more than 32 percent over 2012, an effect of dramatic cost reductions over the past few years.”

The renewable energy sector’s rapid growth is being led increasingly by developing and emerging nations. The 95 developing countries that have support policies in place for renewables today comprise the majority of the 138 countries with such policies around the world. In 2005, only 15 developing countries had renewable support policies, indicating a more-than sixfold increase in just eight years. The rise of support in the developing world contrasts with declining support and policy uncertainty in some industrialized economies, including several European countries and the United States.

“The global policy landscape remains dynamic,” says Evan Musolino, Worldwatch research associate and co-author of the report’s policy chapter. “In addition to these new national policies, support at the sub-national level is playing a critical role in countries such as Canada, India, and the United States. In many places, municipal governments have emerged as some of the most active and ambitious drivers of renewable energy growth.”

This slate of robust policies coupled with continuing technological advances, falling prices, and innovations in financing have made renewables more affordable for a broader range of consumers worldwide. Showcasing the increasingly crucial role that renewables can play in national development—including in expanding energy access—the Renewables 2014 Global Status Report will be launched on June 4th at the Sustainable Energy for All Forum at United Nations Headquarters in New York.

“Renewables are one of the most important tools in this century for social, economic, and environmental progress,” says Alexander Ochs, director of climate and energy at Worldwatch. “The paradigm that being dirty is good for the green in your pocket is eroding. This report demonstrates that we can overcome the political barriers and vested interests still in the way of a smarter, safer, and healthier world.”

The Renewables Global Status Report is the world’s most frequently referenced report on the renewable energy market, industry, and policy developments. The 2014 edition is available publicly at www.ren21.net/gsr.

Additional highlights of the report include:

REN21 is the global renewable energy policy multi-stakeholder network that connects a wide range of key actors from governments, international organizations, industry associations, science and academia, as well as civil society to facilitate knowledge exchange, policy development and joint action towards a rapid global transition to renewable energy. REN21 promotes renewable energy to meet the needs of both industrialized and developing countries that are driven by climate change, energy security, development and poverty alleviation. For more information, visit www.ren21.net.