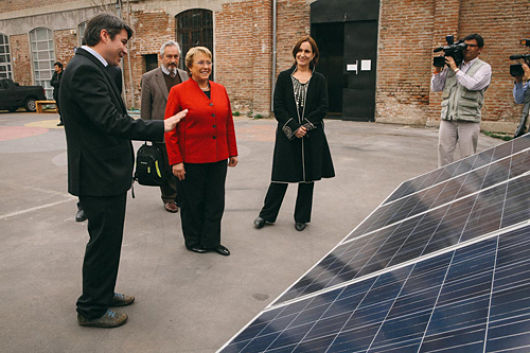 President Michelle Bachelet of Chile inaugurated the Amanecer Solar CAP plant in Copiapo June 6. The project was developed, built and interconnected by SunEdison under an offtake agreement with CAP Group.

The Amanecer Solar CAP plant has 100 MW of total installed capacity; the amount of energy consumed each year by about 125,000 Chilean homes, or equivalent to 10 percent of the renewable energy generation capacity goal established by the Chilean Government for 2014. The project involves an investment of $250 million and is critical for the future development of renewable energy in Chile and Latin America.

Located 23 miles from Copiapo in the Atacama Desert, the plant has more than 310,000 photovoltaic modules spread over 250 acres. The Amanecer Solar CAP plant was built in only six months and all of its energy is injected into the Central Interconnected System, which lowers the net cost of grid electricity.

In its first year of operation it is estimated that the plant will inject 270 GWh of renewable energy into the system. To generate the same amount of energy using diesel would require more than 71 million liters of fuel.