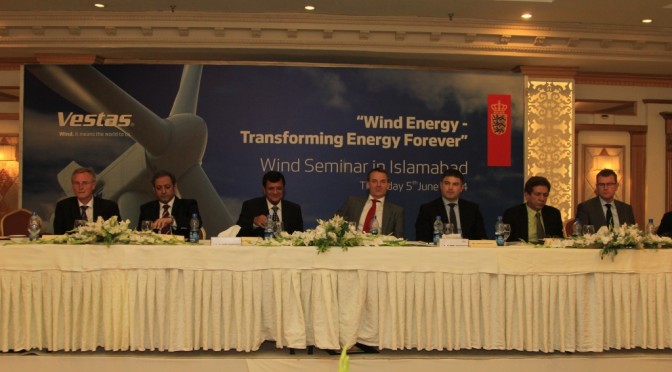 Pakistan is facing a critical energy crisis and needs to explore avenues within renewable energy to improve its power supply arise.

It is also estimated that the country loses up to 3% of its GDP per annum because of power shortages in the country.

This was stated by the key speakers at a seminar held on the effectiveness of wind energy in curbing energy challenges in Pakistan.

The seminar, which was organized as part of a high-level delegation visit to Pakistan by global wind leader Vestas, a Danish company, in joint collaboration with the Embassy of Denmark, was attended by representatives from the Government, financial institutions, business and energy sector. Dr. Mussadiq Malik, Special Assistant to Prime Minister was the Chief Guest. Speaking at the session, the head of the Vestas delegation, Mr Danny Nielsen, Chief Operating Officer, Vestas Asia Pacific & China, commented that Pakistan can definitely change the energy mix in favor of wind energy. “Vestas wind journey began in the late seventies, on the heels of the second global oil crisis. We have seen so many success stories from other countries, who had been struggling with energy challenges, but today are coming out of this crisis in favor of wind”, said Mr. Neilsen. “Wind does not require fuel. It does not create greenhouse gasses nor does it produce toxic or radioactive waste. These are very strong reasons as to why wind and renewable energy is the future answer to the world’s energy problems”, he added.