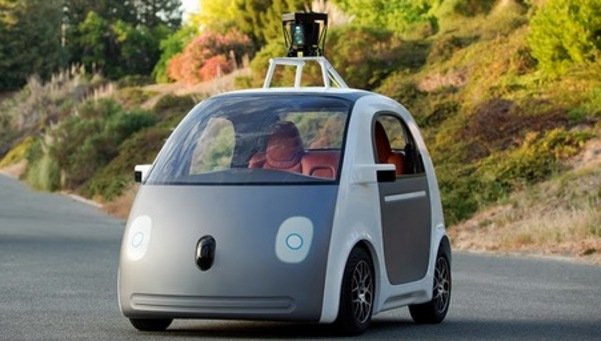 If you’re uneasy at the idea of riding in a vehicle that drives itself, just wait till you see Google’s new car. It has no gas pedal, no brake and no steering wheel.

Google has been demonstrating its driverless technology for several years by retrofitting Toyotas, Lexuses and other cars with cameras and sensors. But now, for the first time, the company has unveiled a prototype of its own: a cute little car that looks like a cross between a VW Beetle and a golf cart.

“They won’t have a steering wheel, accelerator pedal, or brake pedal … because they don’t need them,” Google said Tuesday in a blog post introducing the unnamed electric vehicles. “Our software and sensors do all the work.”

Unlike previous models, these cars won’t have human drivers monitoring them at all times. Google said the cars can detect objects up to 200 yards away in all directions and adjust their speed, turns and braking accordingly.

The cars’ speed for now has been capped at 25 mph, allowing engineers to minimize the risk of crashes during testing.

Inside, the spartan cars have few dashboard controls, no glove box and no stereo.

“We’ve designed for learning, not luxury, so we’re light on creature comforts,” Google said. “But we’ll have two seats (with seatbelts), a space for passengers’ belongings, buttons to start and stop, and a screen that shows the route — and that’s about it.”

Google did not explain how the car navigates, although passengers would presumably punch in a destination on the dashboard screen and let the computers do the rest.

The company plans to build about 100 prototype vehicles and begin testing them later this summer. If everything goes well, Google then will run a small pilot program in California over the next few years.

The cars represent another step into hardware for Google, which in recent years has introduced its Glass connected headset and bought Nest, a startup that makes “smart” thermostats and smoke detectors. Google said it eventually hopes to partner with an automaker to produce the self-driving vehicles instead of building them itself.

The bubblelike Google cars arrive as the U.S. is struggling to accept a sci-fi future of robotic vehicles and other technological advancements.

Four states — California, Nevada, Florida and Michigan — now allow self-driving vehicles on their roads as long as a human driver is behind the wheel at all times.

Most major automakers are also developing vehicles that drive autonomously.

Google posted a video Tuesday featuring testimonials from people who had ridden in the new cars.

“The human feeling of it is very well engineered, and it is very smooth,” said an older man identified only as Nick. “There’s nothing that makes you feel the least bit threatened.”

Here are some of the possible benefits of self-driving cars — some culled from various reports, some a bit more speculative:

1) Self-driving cars would save lives: This is the most obvious one, and roughly 40 percent of fatal accidents are caused by alcohol, distraction, drugs, or fatigue, all of which go away once you take human off the wheel. Letting robots take the wheel would save lives.

Self-driving cars could ease the burden somewhat. Commutes would be quicker, as cars driven by robots could travel at steadier speeds and avoid traffic jams. What’s more, commuters could kick back and read a book or nap rather than stressing out behind the wheel.

3) Driverless cars will be more fuel-efficient: Once we no longer need clumsy human drivers, then self-driving cars and trucks will be able to bunch close together at steadier speeds. The Rocky Mountain Institute estimates that the reduction in wind drag alone from vehicles traveling closely together could reduce fuel use 20 percent to 30 percent. What’s more, cars would no longer need to be so big and hulking — since their users don’t need to fear crashing as much. That all boosts fuel efficiency.

4) Driverless cars will waste less fuel on things like looking for parking. One MIT study found that in congested urban areas, drivers waste an absurd amount of gasoline circling the blocks looking for parking. Intelligent self-driving cars could presumably improve on this.

5) More and more people will be able to drive. There are plenty of people who are not allowed to drive right now. Everyone under 16. The elderly. The disabled. People who are intoxicated or on medication. People who are sleeping. All of those people would now be able to get around in driverless cars.

6) Driverless cars could make car-sharing more popular. By some estimates, most privately owned cars are currently parked 90 percent of the time. That’s a huge waste — we spend a lot of money for cars that sit in the parking lot most of the time. In theory, self-driving cars could be used more productively — say, through car-sharing services. That might mean fewer cars overall.

So much easier with all these self-driving cars around. Piriya Wongkongkathep/Getty Images

7) Self-driving cars could make walking and biking more appealing. If self-driving cars are safer than human drivers on the road. That’s not a bad thing from a public health perspective.

For one, if self-driving cars can be lighter and more efficient, they’ll be able to go much further on a single battery charge. That could allow electric cars to catch on more quickly — again, possibly saving on fuel use.

9) Driverless cars could bring billions of dollars in benefits. Last year, Daniel Fagnant and Kara Kockelman of the University of Texas tried to tally up many of these myriad benefits.