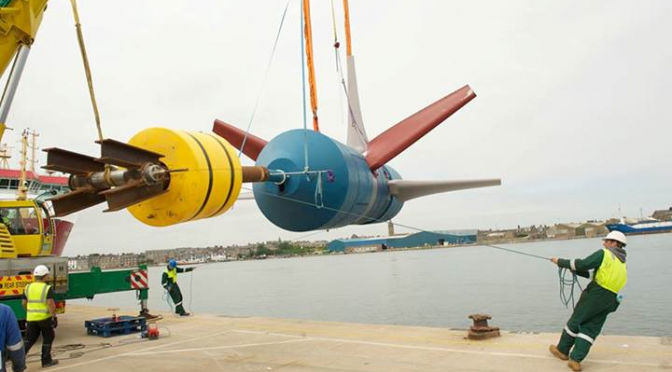 Nautricity, the renewable energy company, has been given the go-ahead to develop one of the UK’s first ‘next generation’ tidal energy schemes in waters off the Mull of Kintyre.

Marine Scotland has given consent for the deployment of the first Contra Rotating Marine Turbine (CoRMaT) device, capable of generating enough electricity to supply 400 homes, to be deployed in the Irish Sea, south of Machrihanish, Argyll.

In addition, Argyll and Bute Council has approved the construction of an onshore sub-station that will connect the array to the National Grid.

The Glasgow-based company is only the fourth to be granted full permission to deploy tidal devices in Scottish waters, having already received consent from the Crown Estate and SSE, the electrical network operator.

Work on the onshore connection is expected to start later this year with the devices being deployed in the water in early 2015.

Nautricity was selected to develop the CoRMaT technology as part of the Government’s WATERS2 funding package, aimed at helping Scottish firms to secure an increased share of the international marine energy market.

Last week itannounced it was on track to be the first tidal energy technology developer to produce commercially viable electricity after starting tests on the device, along with its patented HydroBuoy mooring system, at the European Marine Energy Centre, in Orkney.

It aims to build out the Mull of Kintyre tidal development using the experiences gained from this project.

“This will inform the most cost effective development route to be adopted for all technical and commercial aspects of the project said Cameron Johnstone, the next generation tidal energy company’s co-founder and CEO. “It is envisaged that a multi-megawatt array could be realised on the site post-2016.”

He added: “We are delighted to be in at the very start of commercial tidal energy generation in the UK. Receiving full consent for this project is a great vote of confidence in our technology and our site development capabilities.”

The waters off the Mull of Kintyre are one of only four locations in Scotland to receive full consent for commercial operation. The turbines will be completely submerged and not visible from shore and they will have no measurable adverse impact on the marine environment.

In 2012, Nautricity commissioned a comprehensive environmental impact assessment and a community and stakeholder engagement exercise in the area to ensure the project commanded popular local support.

Over the past 18 months, the Strathclyde University spin-out company has built the first commercial scale CoRMaT device which, with a rotor span of 10 metres, is significantly larger than early test models.

The device uses a novel, contra-rotating rotor system to cost-effectively harness tidal energy. While conventional tidal devices resemble wind turbines constructed on the seabed, incurring enormous deployment and engineering costs, it is lighter and more compact, tethered to the seabed and held in tension by a sub-surface float.

The turbines can be deployed in a range of water depths of up to several hundred meters deep and, because their closely spaced, contra-rotating rotors moving in opposite directions, they remain steady in the face of strong tidal flows, allowing the device to “fly” from a simple tensioned mooring. This allows the device to maintain optimum alignment into the tidal flow as it varies its direction for maximum energy capture.

With the help of a £250,000 Smart Scotland grant from Scottish Enterprise, Nautricity also developed and patented its unique HydroBuoy station keeping technology, a tethered based mooring system that ensures the CoRMaT devices remain steady in strong currents.

The buoy, shaped like the wing of an aircraft, combines displacement buoyancy with hydrodynamic lift to vary mooring tension proportionally, according to the strength of tidal speeds.