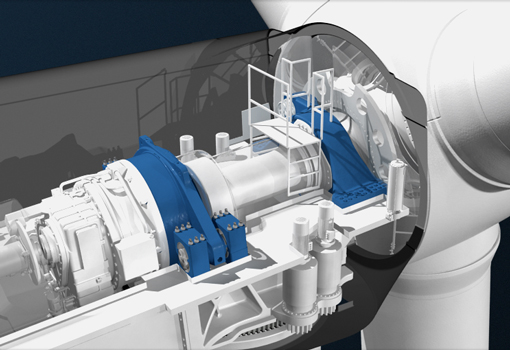 “The rotor is the motor”, said Nordex CEO Dr. Jürgen Zeschky at a local press conference in Rostock hold May 21st, highlighting the strategic importance of rotor blades as a core technology. Last year, Nordex SE achieved growth of around 33 percent, not least due to strong demand for its highly efficient turbines with their rotors of an above-average size. The company wants to reinforce this success and will therefore invest an amount in the double-digit millions in series production of modern, large-dimensioned rotor blades.

This investment will initially involve the expansion and modernisation of its own plant in Rostock. The other half of the funds will be channelled into a long-term “built-to-print” strategy with international partners to harness the cost advantages of their international production facilities. This is because more than 80 percent of all turbines which Nordex installs for its customers go on line in countries outside Germany.

Zeschky explains: “We will expand our rotor blade plant in Rostock to become the lead factory.” In future, Nordex’s Rostock-based plant will concentrate on producing the most modern and largest rotor blades. Over the next few years these will be the NR58.5 and NR65.5 blades for the N131/3000, N117/3000 and N117/2400 turbines. With sales volumes expected to rise, Nordex wants to increase the production output at its own plant. At the same time, it remains committed to covering only 20 to 30 percent of its requirements internally.

The greater dimensions of the products and tools (moulds) necessitate modifications to the existing production halls. In addition, an entirely new hall for rotor blade finishing will be built. The resultant physical separation of basic production and finishing removes the need for complex production steps in cabins and facilitates quality assurance.

All told, Nordex will invest some EUR 50 million on the implementation of its blade strategy between 2014 and 2016. In Rostock alone, a budget of around EUR 25 million has been set aside for new and additional tools (moulds) and for the construction of the new hall.