The Department of Energy (DoE) recently announced that $10 million will be distributed in Colorado, Florida, Alabama, Washington and California for six new research and development projects that will advance innovative concentrated solar power (CSP) technologies. 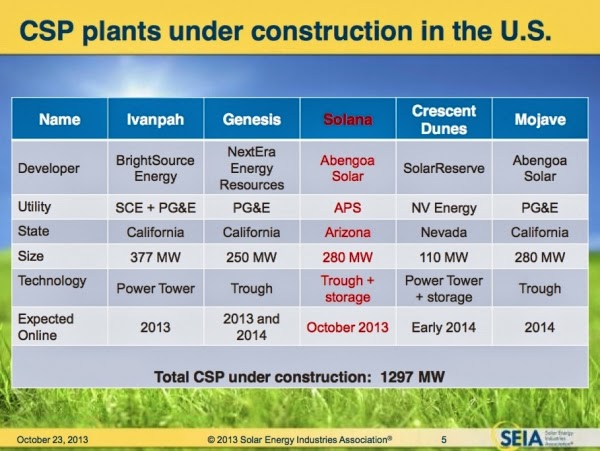 Concentrated solar power technologies use mirrors to focus and concentrate sunlight onto a receiver from which a heat transfer fluid carries the intense thermal energy to a power block to generate electricity. The projects will develop thermochemical energy storage systems, which could store the sun’s energy at high densities and temperatures in the form of chemical bonds, thereby enabling more efficient energy storage, while using less storage material and cutting the cost for utility-scale CSP electricity generation as a result. 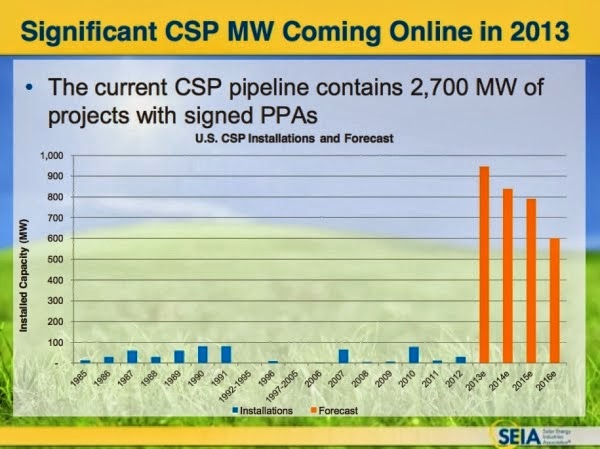 “By improving energy storage technologies for concentrated solar power systems, we can enhance our ability to provide clean and reliable solar power, even when the sun is not shining,” says Ernest Moniz, DoE secretary.
The chemical compounds used to store the chemical energy are later broken down to release energy when needed. Six teams from universities, national laboratories and research institutes, working with industrial partners, will test different chemical processes for CSP thermochemical energy storage that could further advance CSP technology, helping the industry step closer to meeting the SunShot Initiative’s technical and cost targets for CSP and moving the U.S. toward its clean energy future.
Also today, the DoE released a new report, “2014: The Year of Concentrating Solar Power,” focusing on five of the most innovative CSP plants in the world that, in 2014, are expected to be fully operational in the southwestern U.S. as a result of sustained, long-term investments by the administration and committed solar industry partners.
The DoE’s report, released jointly by the Department’s Loan Programs Office (LPO), Office of Energy Efficiency and Renewable Energy (EERE) and SunShot Initiative, states that when completed, these projects will provide a combined 1.26 GW of electricity, nearly quadrupling the preexisting CSP capacity in the United States with the potential to power more than 350,000 average American homes. In addition, the five CSP projects illustrate how loan guarantees provided by the DoE encouraged private market investment and accelerated the deployment of these technologies at commercial scale.
According to data recently released by SNL Energy, utility-scale solar had its largest Q1 in history: “More than doubling the capacity installed in the year-ago quarter, the first quarter of 2014 was the best first quarter of all time for utility-scale solar, with 680 MW of capacity installed. After a record year of installations in 2013, up to 5.3 GW is slated to come online during the remainder of 2014.”
The LPO has played a significant role in expanding PV, CSP and solar thermal storage in the U.S., helping to finance the first five utility-scale PV plants in the U.S. larger than 100 MW. Subsequently, the next 10 of that scale were financed without DoE financing, and as the SNL Energy report indicates, the industry continues to grow.
Likewise, the LPO helped to finance the five CSP projects highlighted in the DoE report – which are the first to be built at commercial-scale in the U.S. in decades – as part of its mission to accelerate the commercial-scale deployment of innovative technologies. These projects include the world’s largest CSP plant, the first solar thermal storage in the U.S., and when completed, the world’s largest solar thermal storage.
“The Department’s loan guarantees are an important element for helping innovative technologies like CSP get the financing they traditionally have trouble accessing for their first few commercial projects,” says Peter Davidson, executive director of the LPO. “Through successful public-private partnerships, we’ve been able to prove out CSP as a commercially viable energy source in the U.S. and we look forward to seeing it grow in the future.”
Rhone Resch, president and CEO of the Solar Energy Industries Association (SEIA), released the following statement today after reviewing the Department of Energy’s new report, “2014: The Year of Concentrating Solar Power,” which profiles five utility-scale concentrating solar power (CSP) plants and calls 2014 a “significant milestone in the history of American solar energy.”
“We applaud the Department of Energy (DOE) for its recognition of this important technology and for the Administration’s continued commitment to solar energy. Last year, the U.S. installed 410 megawatts (MW) of CSP, increasing total CSP capacity by more than 80 percent. As this report details, we can expect even more growth in 2014. The five CSP plants profiled in this report, which are expected to all be online by the end of the year, represent 1.252 gigawatts (GW) of solar capacity – enough to power 427,000 average American homes. As states gear up to reduce carbon emissions, CSP will play a huge role in producing more clean, renewable energy to power America.
“We also congratulate the SunShot program on its announcement of more than $10 million towards research and development of CSP technology. Smart public policies have already helped to create 143,000 American jobs in the solar industry, pumped tens of billions of dollars into the U.S. economy, spurred private sector innovation and investment, and helped fight climate change. Solar is the fastest-growing source of renewable energy in America, accounting for nearly 30 percent of new energy capacity in 2013, and we are pleased to join DOE in celebrating what is sure to be another record-setting year – with concentrating solar power playing an important part.”
www.energy.gov/sites/prod/files/2014/05/f15/2014_csp_report.pdf
http://www.helioscsp.com/noticia.php?id_not=2507
http://www.helioscsp.com/noticia.php?id_not=2505
Concentrated Solar Power, Concentrating Solar Power, CSP, Concentrated Solar Thermal Power, solar power, solar energy, DoE, U.S., SEIA,