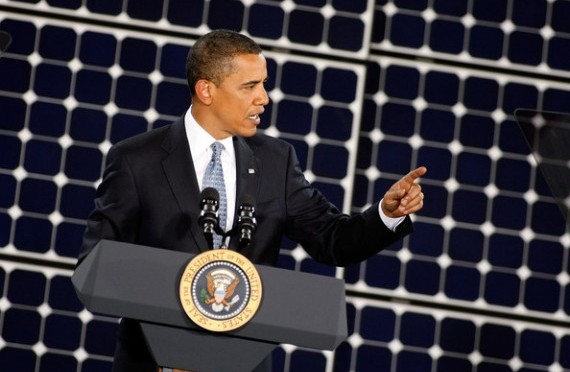 The nation needs to ramp up its use of solar energy on a much bigger scale to bring down emissions of the greenhouse gases that worsen global warming, President Barack Obama is expected to say in a speech Friday that will kick off a big push by White House to expand the use of solar energy nationwide.

Nearly 30 years after Ronald Reagan tossed the solar panels Jimmy Carter had built into the White House roof, the Obama administration has completed installation of new panels on top of the executive residence.

“Continuing President Obama’s commitment to lead by example to increase the use of clean energy in the U.S., the White House has completed installation of American-made solar panels on the first family’s residence as a part of an energy retrofit that will improve the overall energy efficiency of the building,” said White House spokesman Matt Lehrich.

Obama is set to announce a plan to create enough solar energy to power more than 130,000 homes and new efforts on energy efficiency that would save the equivalent of taking 80 million cars off the road for a year, USA Today reported.

The speech is set for mid-day Friday (Eastern time) at a Mountain View, California, Walmart store. The Arkansas-based retail giant is one of a number of private companies that will commit to similar solar and energy efficiency projects, the White House said.

Solar energy use in the United States has doubled over the past year, the White House is also set to announce, which led to a 20 percent rise in the number of solar-related jobs nationwide.

Friday morning, the White House announced that it had completed the installation of its own rooftop solar panels.

“Solar panels in the White House, I think, [send] a really important message that solar is here, we are doing it, and we can do a lot more,” said U.S. Energy Secretary Ernest Moniz. “I am very bullish on the future of solar energy as a key part of our clean energy future.”

The move comes after the release earlier this week of the blockbuster National Climate Assessment, which painted a portrait of a nation already grappling with large-scale impacts from climate change on extreme weather, crop production and human health.

In Friday’s speech, the president is expected to announce a series of executive orders that will push federal agencies toward more adoption of solar energy in order to reduce their reliance on fossil fuel-generated electricity, as well as a range of other efforts: