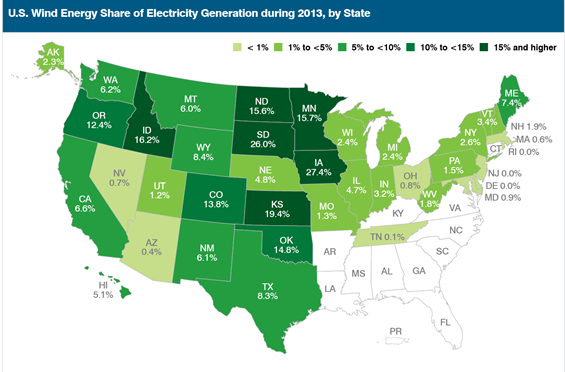 The US had more than 13 GW of wind power projects under construction at the end of the first quarter to evidence a continuing boom, according to the American Wind energy Association.

Wind farms are being developed in 21 states with Texas topping the pile for activity on 8 GW, followed by Iowa (more than 1GW), Kansas (700MW), North Dakota (600MW) and Oklahoma (nearly 500MW).

Figures reveal the US wind industry installed 133 wind turbines totalling 214 MW in the period, which is more than was installed in the first three quarters of 2013. Total installed wind capacity in the nation now stands at 61.327 GW.

The findings come ahead of the annual Windpower Conference and Exhibition in Las Vegas next week.

“The US wind industry has a busy few weeks ahead with the largest wind energy conference in North America coming up and momentum on Capitol Hill to take up an extenders package in the full Senate, including the Production Tax Credit,” said AWEA chief executive Tom Kiernan.

“An extension of the PTC is essential to continuing the growth of US wind energy and we look forward to watching the full Senate take up the package soon.”

Meanwhile, almost early 1GW of new power purchase agreements for wind energy have been unveiled so far in 2014, building on the 8GW of PPAs signed in 2013.