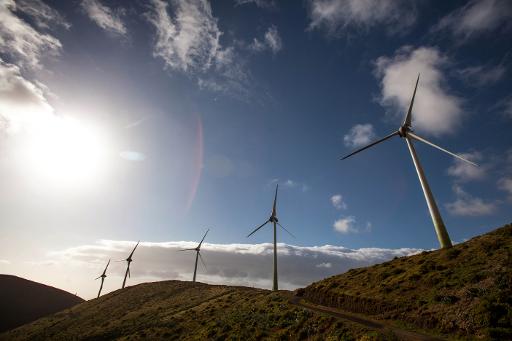 Spain’s Canary Islands, El Hierro, is making a splash by becoming the first island in the world fully energy self-sufficient through combined water and wind power.

A wind farm opening at the end of June will turn into electricity the gusts that rake the steep cliffs and green mountains of the volcanic island off the Atlantic coast of Africa.

Its five turbines installed at the northeastern tip of El Hierro near the capital Valverde will have a total output of 11.5 megawatts—more than enough power to meet the demand of the island’s roughly 10,000 residents and its energy-hungry water desalination plants.

Although other islands around the world are powered by solar or wind energy, experts say El Hierro is the first to secure a constant supply of electricity by combining wind and water power and with no connection to any outside electricity network.

Surplus power from the wind turbines will be used to pump fresh water from a reservoir near the harbour to a larger one at volcanic crater located about 700 metres (2,300 feet) above sea level.

When there is little or no wind, the water will be channelled down to the lower reservoir through turbines to generate electricity in turn.

“This system guarantees us a supply of electricity,” said the director of the Gorona del Viento wind power plant, Juan Manuel Quintero who is supervising final tests before the plant starts functioning in a few weeks.

The plant will account for 50 percent of the island’s electricity demand when it is officially inaugurated at the end of June, a figure that will rise to 100 percent over the following months.

The scheme will cut carbon dioxide emissions by 18,700 tonnes per year and eliminate the island’s annual consumption of 40,000 barrels of oil.

El Hierro will maintain its fuel oil power station as a back up, just in case.
Electric vehicles

El Hierro wants to extend its environmental credentials even further by ensuring that by 2020 all of its 6,000 vehicles are run on electricity thanks to an agreement with the Renault-Nissan alliance.

The island authorities own 60 percent of the plant, with 30 percent held by Spanish energy company Endesa—a subsidiary of Italian group Enel—and 10 percent by a local technology institute.