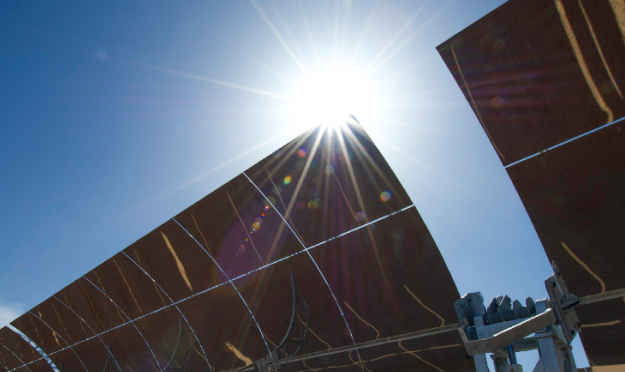 The plant comprises two 125 MW units and utilizes parabolic trough CSP technology. NextEra commissioned the first unit in November 2013 and the second in March 2014, seven years after development of the project began in 2007.

“We are proud to be a part of an initiative that contributes to California’s renewable energy supply and helps to power Riverside County’s local economy,” said NextEra Energy Resources President and CEO Armando Pimentel. “Reaching this important project milestone would not have been possible without the cooperation and hard work of all our project partners.”

The Genesis CSP project is located on 790 hectares of public land managed by the U.S. Bureau of Land Management in Riverside County. Development of the project began in 2007, and construction began in January 2011.

The CSP plant comprises Senertrough parabolic trough collectors by Sener, with Flabeg RP3 mirrors. These heat Therminol VP-1 heat transfer fluid by Solutia to 390 degrees Celsius, which is then used to create steam to drive turbines. The plant is cooled with an air-cooled condenser, in a “dry-cooling” design which uses far less water than wet-cooled CSP plants.

All of the electricity generated by the plant is being sold to Pacific Gas & Electric Co. (PG&E, San Francisco, California, U.S.) under a long-term contract.

Genesis is part of over 1 GW of CSP plants which have come online in the U.S. states of Arizona, California and Nevada over the last six months. These include Abengoa’s 280 MW Solana CSP plant in Arizona, which came online in October 2013, and the 377 MW Ivanpah CSP plant which owner NRG says achieved commercial operation in February 2014.