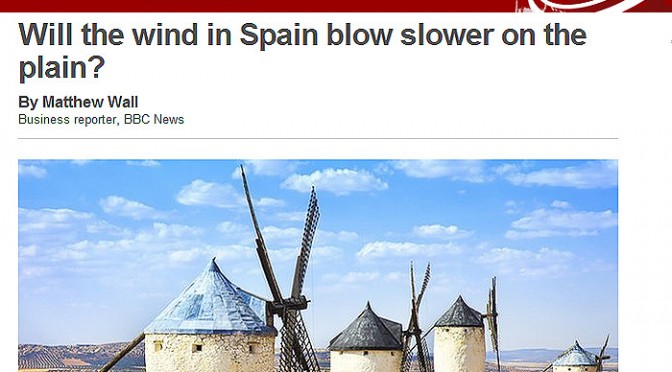 Since the time of Don Quixote, the winds have blown strongly across the Spanish plains. But these days, Cervantes’ deluded hero would be more likely to go tilting at wind turbines rather than mills.

This is because sunny Spain has established itself as a European superpower in wind energy as well as in solar power.

But just as it establishes its position as a global leader in the sector, the government is threatening to pull the rug from under the industry’s feet.

For the first time in Spain’s history, wind contributed the same proportion (21%) of electricity as nuclear last year, according to Red Electrica de Espana (REE), Spain’s national grid. Both now contribute more than any other power source.

This record feat appeared to confound the energy sceptics, who have argued that low-carbon renewable energy production is too intermittent and expensive to be a reliable alternative to coal, gas and nuclear.

Wind alone generated nearly 54,000 gigawatt-hours (GWh) of electricity last year, providing power to about 10 million households, and is second only to Germany in terms of installed capacity.

So how has Spain achieved this?

“This gave visionary companies the confidence to invest. About 30bn euros (£25bn; $41bn) has been invested in the sector since the first turbine was erected in 1984,” she says.

And in marked contrast to some of the nimby attitudes displayed by many Britons towards onshore wind turbines, Spanish villagers welcomed the new technology with open arms, Ms Franco says.

This enthusiasm was perhaps related to the fact that government subsidies for renewables were not passed on to consumers in the form of higher electricity prices.

This policy contributed to what Spain calls its “tariff deficit” across the entire power generation sector, thought to amount to 25bn to 30bn euros. 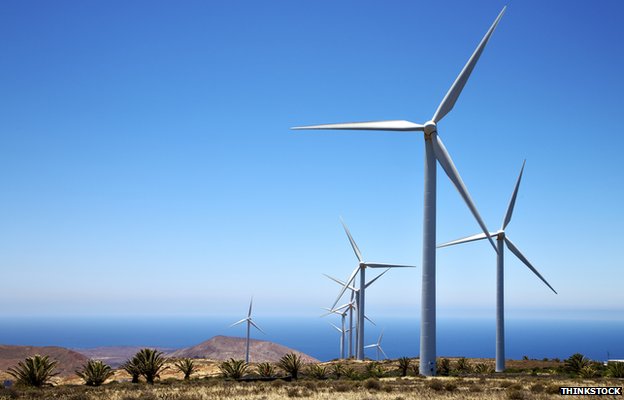 Spain has the second largest installed wind power capacity in Europe, behind Germany

Something needed to give, and a cash-strapped Spanish government, reeling from banking and property crises that necessitated a 41bn euro bailout package from the European Union (EU) in 2012, abruptly pulled the plug on government support for its energy sector in the same year.

Not only this, but it imposed a 7% tax on all electricity generation revenues, whether renewable or not.

These measures were followed up by further retroactive cuts that could result in “subsidy reduction of about 1.2bn euros for the wind industry in 2014”, says Ms Franco. “We don’t really know yet what the full financial impact will be.”

As, Eduard Sala de Vedruna, director of global wind power at research company IHS, says: “Spain is the victim of its own success.”

This has had a chilling effect on European investment in the sector.

“Installation levels in Spain have been declining sharply [since the government withdrew its support],” says Pierre Tardieu, of the Brussels-based European Wind Energy Association (EWEA).

The figures speak for themselves. In 2012, Spain installed 1,110 megawatts (MW) of new wind capacity. By the end of last year, this figure had dropped to just 175MW.

But Spain is not alone. Most EU countries have scaled back on their level of new wind capacity installation.

The UK also strongly increased new capacity. This is especially ironic given the impression that wind is a controversial and difficult issue in the country, with major power companies recently pulling out of large-scale offshore wind projects and the Conservative Party reportedly considering curbing the expansion of onshore wind turbines.

“The 2013 market was driven by Germany and the UK. About 50% of new installation has come from these two countries,” says Mr Tardieu.

It estimates that the sector attracted about $80bn (£48bn; 58bn euros) of investment worldwide in 2013, just 1% down on the previous year.

Unep concludes that a sharp fall in the cost of wind turbines and a general improvement in the cost-competitiveness of the sector has enabled a growing number of wind projects globally to be built without any government support at all.

“Lower costs have enabled subsidies for new projects to be reduced, and brought wind and solar much closer to full competitiveness with fossil-fuel alternatives,” it states.

The report says that, in the absence of cheap indigenous coal or gas, and given plentiful sunshine and wind, solar and wind power can be cheaper than fossil fuel generation. 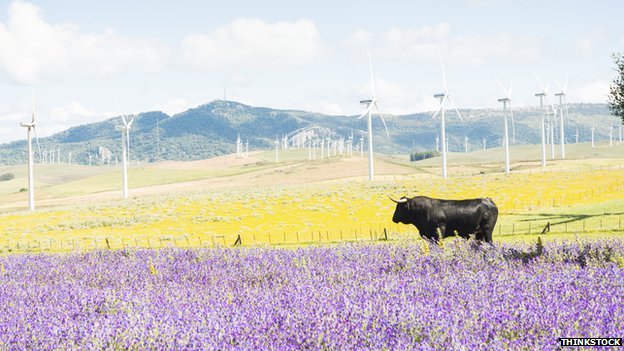 Meanwhile, the European Commission, the EU’s executive body, believes that while state subsidies for renewables have helped progress towards achieving carbon reduction goals, they have also caused “serious market distortions and increasing costs to consumers”.

Change in the wind

Falling wind infrastructure costs, coupled with the country’s serious debt problems, have convinced the cash-strapped Spanish government that subsidies for the sector are no longer needed.

Mariano Rajoy’s government seems to believe the industry is now so strong it can withstand a clawback of some of the funds given to it in previous decades.

No wonder Spain’s wind sector feels like it is being punished for its success.

The country’s dramatic shift towards renewables, along with a reduction in power output from traditional greenhouse gas-emitting sources, helped Spain reduce its CO2 emissions to 61.4 million tonnes last year, 23.1% lower than in 2012 – a significant achievement.

January was another record month for wind power in Spain, and the industry made the most of its installed capacity, with wind energy production reaching 6,626GWh for the first time ever, 3.1% higher than the previous record set last November.

But there will always be a trade-off between governments’ desire for economic competitiveness and environmental goals, argues Mr Sala de Vedruna.

“The fact remains that, in most countries, renewables still receive more subsidies than other cheaper energy sources, such as coal,” he says. “Short-term goals often conflict with longer-term goals.”

So while such political and regulatory uncertainty swirls around the sector, Spanish wind turbines could find their rapid expansion across the country’s high plains brought to an abrupt halt.