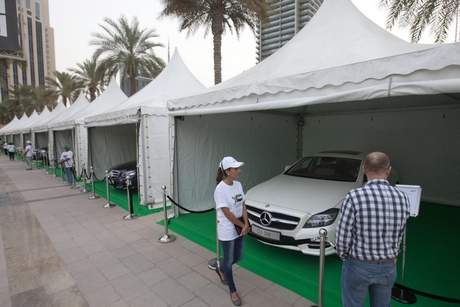 Power chiefs are already in talks to build a network of charging stations at locations such as hotels and shopping malls.

Dewa, the Dubai Electricity and Water Authority, intends to test 100 electric cars in its own fleet over the next two years.

“New initiatives require coordination and cooperation from all partners. There will be a very clear road map in order to start with the infrastructure, location-wise.

“I think you will see electric cars in Dubai within a year and half.”

Electric cars are cleaner and noise-free alternatives to conventional combustion-engine vehicles, but they require frequent charging and any scheme to encourage their use will have to rely on an extensive infrastructure of charging stations.

“Dewa will start, of course, with purchasing electric vehicles and our target is initially 100 vehicles maybe for the next two years,” Mr Al Tayer said.

Experts say electric cars are more efficient than their convention-fuel powered equivalents because of the greater efficiency with which power plants produce electricity.

If the power used by electric cars is produced by renewable sources, then they become a carbon-neutral transport option, meaning no harmful greenhouse gases are released into the atmosphere.

No fully electric cars are on sale in showrooms in Dubai.

Mr Al Tayer was speaking at the opening in Dubai of Wetex, the Water, Energy, Technology and Environment Exhibition, where the local Nissan dealer Arabian Automobiles is showcasing the electric Nissan Leaf. The display of the car was a stop on Monday for an official delegation led by Sheikh Ahmed bin Saeed, chairman of the Dubai Supreme Council of Energy.

Dewa is also pushing ahead with plans for a 100-megawatt solar photovoltaic power plant in Dubai, capable of producing energy from sunlight.

International companies interested in building and operating the plant, selling the clean energy to Dewa, met government officials on Monday.

The project is part of the Mohammed bin Rashid Al Maktoum solar park, which the Government wants to see grow to a capacity output of 1,000 megawatts by 2030.