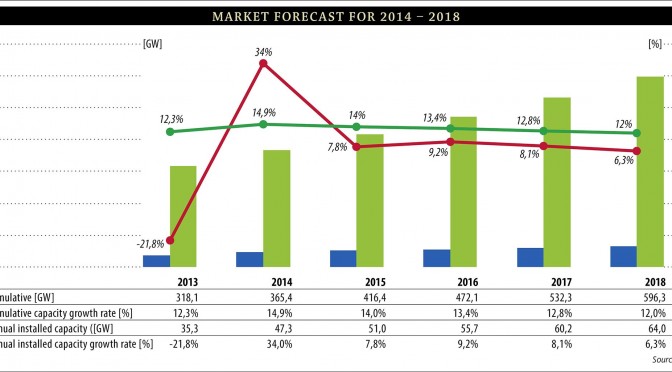 The Global Wind Energy Council launched its Global Wind Report – Annual Market Update today, updating the status of the global industry, along with market projections for the years 2014-2018.

GWEC expects installations of at least 47 GW in 2014, a dramatic increase over 2013 levels. The market will be led by China, but with strong recovery in the US market, and record installations in Canada and Brazil; and hundreds of MW in South Africa.

“The global market is back on track for 2014”, said Steve Sawyer, GWEC Secretary General. “A strong Chinese market, recovery in the US and an increasing role for emerging economies in the global market means that after 2014 the market will resume its steady if unspectacular growth, and end up just about doubling total global installations during the five year period to 2018.”

However, GWEC cautioned that without a strong global climate policy, market growth is unlikely to return to the 20-25% or more average growth which has characterised most of the last two decades.

In the absence of a global price for carbon, or anything close to it, wind energy’s other attributes come to the fore. Today in many markets its most compelling selling point is cost-competitiveness.  Wind is already competing successfully against heavily subsidized incumbents in a growing number of markets around the world as the technology and its implementation steadily improve; and job creation remains a priority just about everywhere. Furthermore, recent events in Ukraine and elsewhere point to wind energy’s contribution to energy security.

“Wind is now a mainstream technology, and a central part of electricity market development in an increasing number of countries,” continued Sawyer. “But for the industry to reach its full potential, it is essential that governments get serious about climate change, and soon.”

GWEC’s annual Global Wind Report gives a  comprehensive snapshot of the global industry, now present in over 80 countries with 24 countries having more than 1,000 MW installed. This year’s edition includes insights of the most important wind power markets worldwide, future trends with projections for 2014-2018, an expert opinion on redefining the cost debate by Siemens Wind, a chapter featuring a renewable energy future and the state of play of the global offshore market.