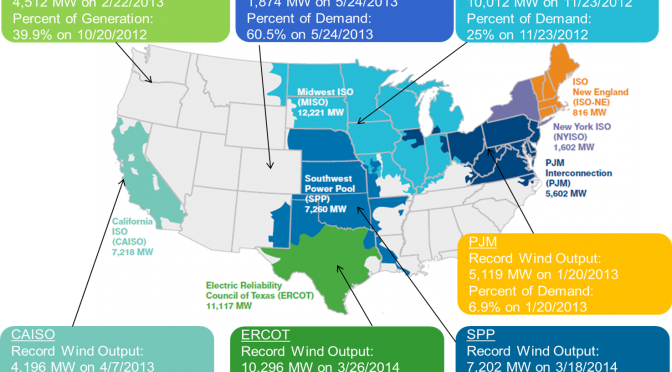 Wind power accounted for 7,202 megawatts of electricity March 18 in the Southwest Power Pool, the regional transmission organization that covers Oklahoma and parts of eight other states. That surpassed the previous record of 6,448 megawatts set in October. The data was compiled by the American Wind Energy Association.

“It may have taken a few years, but in many parts of the country, the grid is finally catching up with wind energy’s rapid growth,” said Michael Goggin, senior electric industry analyst for the American Wind Energy Association. “These recent wind energy records, and the tens of billions of dollars of new wind energy investment in the pipeline, are a product of those transmission success stories.”

Most days, coal is the top generating fuel for the Southwest Power Pool, which has more than 570 generating plants. On Thursday afternoon, coal provided 62 percent of the electricity, followed by natural gas at 17 percent and wind at 16 percent.

In Texas, the Electric Reliability Council of Texas set a new record March 26 with 10,296 megawatts of electricity generated from wind. That’s enough electricity to power more than 5 million typical homes. On Monday, wind power accounted for almost 40 percent of the electricity demand in the ERCOT system.

New transmission projects and ways to pay for them helped boost the wind penetration in both the Southwest Power Pool and ERCOT, the American Wind Energy Association said. The pool’s Highway/Byway transmission cost plan is making progress on several projects designed to relieve transmission congestion and bring more renewable power to the regional grid.

Under the Highway/Byway plan, each utility member in the Southwest Power Pool pays a share of the costs based on its customer base, usage and voltage size of the transmission project. The organization’s latest plan shows $1.5 billion in new transmission projects over the next 10 years. Its 20-year plan, which focuses on high-voltage transmission lines of 345 kilovolts, has projects totaling another $560 million.

Texas recently completed the Competitive Renewable Energy Zones, which include transmission lines that connect wind farms in the Texas Panhandle and west Texas with large cities in north and central Texas. The projects, paid for by Texas ratepayers, cost $6.9 billion and were split among several transmission and distribution utilities.

“Texas has made visionary investments in its electricity infrastructure,” said Jeff Clark, executive director for regional trade group The Wind Coalition. “These investments are paying off for Texas consumers as record levels of inexpensive wind power is lowering electric bills with power that is truly ‘Made in Texas.'”