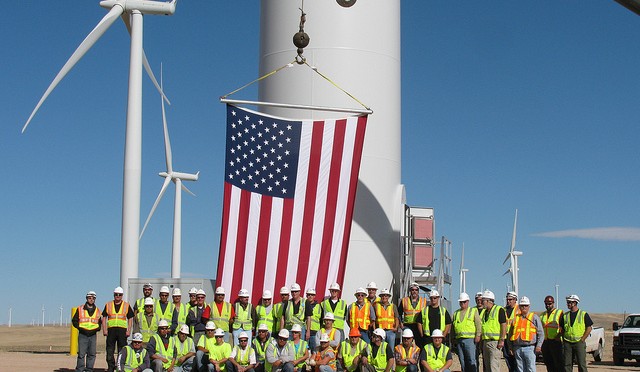 The US Senate Finance Committee has approved a package of renewed tax breaks with a two-year extension of the production tax credit (PTC) for wind energy.

The renewable energy Production Tax Credit (PTC) and Investment Tax Credit (ITC) were included today with bipartisan support, as the U.S. Senate Finance Committee reported out a tax extenders package whose swift passage is critically important to the continued growth of the U.S. wind energy industry.

“We’re grateful to all the supporters of renewable energy on the Senate Finance Committee,” said Tom Kiernan, CEO of the American Wind Energy Association. “This provides a critical signal for our industry, which has created up to 85,000 jobs and has a bright future ahead, as we grow from 4 percent of the U.S. power grid to an expected 20 percent and beyond, so long as we have a predictable business climate.

“Passage by the full Congress will preserve an essential incentive for private investment that has averaged $15 billion a year into new U.S. wind farms, and create more orders for over 550 American factories in the supply chain.”

The PTC and the alternate Investment Tax Credit were added overnight to a modified “Chairman’s mark,” after an earlier draft released Monday left them and several other provisions for further negotiation.

They prevailed on a critical 18-6 vote during the committee markup late Thursday morning, on a motion by Sen. Pat Toomey (R-PA) to strip them out. Five Republicans joined the committee’s Democrats in voting down that amendment: Sens. Chuck Grassley (R-IA), John Thune (R-SD), Rob Portman (R-OH), Mike Crapo (R-ID), and John Cornyn (R-TX).

A number of Senators on both sides of the aisle highlighted the success of the PTC and ITC. Grassley spoke at length in favor of the tax credits, and called Toomey’s arguments against their extension “intellectually dishonest,” considering billions of dollars a year in permanent incentives for other forms of energy with which renewable energy competes.

Thune then withdrew a proposal to phase down the tax credit, saying that discussion belonged in comprehensive tax reform, not the debate over the extenders package, and that the industry “deserves certainty” and that any transition should be “workable and sensible” as AWEA has proposed.

Sen. Michael Bennet (D-CO) called the PTC “vitally important” to his state, because it brings factory work from overseas to the United States, “driving not just economic growth but job growth and wage growth.”

The tax credits now advance toward extension with over 50 other expired provisions of the tax code, in the absence of a comprehensive tax reform deal in Congress.

Extension on the terms in the Senate Finance Committee markup would let wind energy developers qualify if they start construction by the end of 2015, instead of the end of 2013, supporting the wind energy industry as well as the other renewable power sectors that qualify for the tax credits.