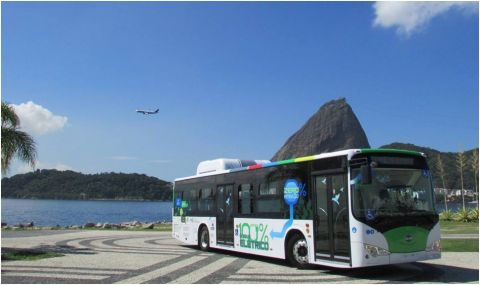 Fetranspor and Rio Bus, the public transportation companies for the state and city of Rio, and BYD, a Chinese company with leading technologies on batteries and electric vehicles, joined together at the opening ceremonies for the launch of the BYD 100% electric bus this week. This is the first pure-electric bus to launch in Rio and is running now on line 249 (Water-Santa Carioca) operated by Matias, the leader of the Consortium Internorte.

The partnership, which aims to test the bus on a regular line for one month, has the support from the City Government through the City Department of Transportation, and the C40 Cities Climate Leadership Group (a network of megacities committed to taking actions to reduce greenhouse gas emissions) and is currently chaired by Mayor of Rio de Janeiro Eduardo Paes.

Rio de Janeiro at the forefront of reducing emissions

Rio is one of the three cities in Brazil to test the 100% electric buses from BYD (São Paulo and Salvador have done successful tests already). The Operation Manager for Mobility at Fetranspor, Guilherme Wilson said that, “the electric buses are no longer just a promise; the electrical technology is a major innovation in the urban mobility sector. In addition, this vehicle has zero emissions, superior durability and lower operating costs, all considerable advantages towards sustainability.”

Companies in Rio have tested some types of buses before, like hybrids, diesel from sugar cane, biodiesel, also CNG buses. The pioneering favored this new partnership. “Fetranspor is a great reference for testing new energy buses in public transportation and the segment in Rio de Janeiro is a model for many cities in the country,” said Vagner Rigon, Sales Vice President of BYD do Brasil. “The partnership with Fetranspor will be important to showcase its economical and environmental benefits and help to develop the market for low carbon buses.”

Besides Brazil, the 100% electric bus has been tested since 2011 in several cities around the world such as Los Angeles and New York (USA), Bogota (COL), London (GB), Copenhagen (DEN) and Oranjestad (Aruba). BYD is testing the buses under different traffic and road conditions, terrain, elevations and temperatures to improve bus design.

The BYD K9 model is the first 100% electric bus in mass production in the world and is the only one that uses BYD’s unique Iron Phosphate (or “Fe”) Battery. Iron Phosphate is considered the cleanest and safest in the market. They are recyclable and fireproof. The batteries are contained in three areas, on the roof besides the back axles and over the front wheels of the vehicle. They are recharged via a bidirectional AV system with grid 380 VAC, which was already installed in the garage at Road A Mathias. Recharging takes four to five hours and allows an average driving range over 250 km.

The electric motors are built into the wheels of the rear axle making it more efficient for passenger loading since the floor height can be dropped lower than where conventional bus axles are. The configuration allows recovering energy when braking. According to BYD, its energy consumption is equivalent to 1.2-1.4 kWh/km, which is around 75% more efficient than conventional buses, making it a lower operating and maintenance costs. The bus holds up to 80 passengers, 29 seated and 50 standing besides the placeholder for wheelchair users, equal to conventional buses.