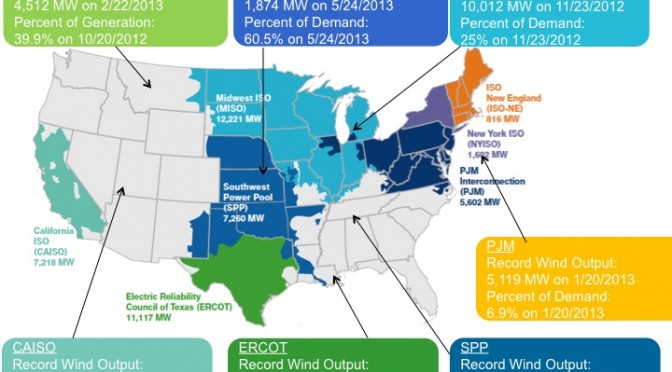 At the time the new record was set, wind generation was providing nearly 29 percent of the 35,768 MW of electricity being used on the ERCOT grid. The new record beats the previous record set earlier this month by more than 600 MW, and the American Wind Energy Association reports it was a record for any U.S. power system.

Of the total generation at the time, 1,433 MW came from wind generators on the Gulf Coast, while 8,863 MW came from other regions. Most came from West Texas, where transmission projects in the Competitive Renewable Energy Zones were recently completed to transport more power from that region to more populated areas of the state.

“With the continuing growth in wind generation capacity and the completion of new transmission projects to get it to the grid, ERCOT is making greater use of this resource, “ said Ken McIntyre, ERCOT’s vice president of Grid Planning and Operations.

Wind generation had already broken previous records twice this month. Additionally, 9,868 MW of wind generation was serving a record 38.43 percent of the 25,677 MW systemwide demand at 3:19 a.m. on Thursday, March 27.

The Electric Reliability Council of Texas (ERCOT) manages the flow of electric power to 24 million Texas customers — representing 85 percent of the state’s electric load. As the independent system operator for the region, ERCOT schedules power on an electric grid that connects 40,500 miles of transmission lines and more than 550 generation units. ERCOT also performs financial settlement for the competitive wholesale bulk-power market and administers retail switching for 6.7 million premises in competitive choice areas. ERCOT is a membership-based 501(c)(4) nonprofit corporation, governed by a board of directors and subject to oversight by the Public Utility Commission of Texas and the Texas Legislature. ERCOT’s members include consumers, cooperatives, generators, power marketers, retail electric providers, investor-owned electric utilities (transmission and distribution providers), and municipal-owned electric utilities.