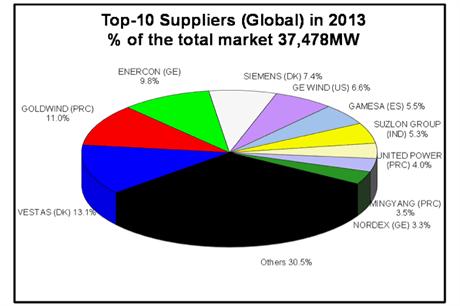 – Vestas recaptures the No. 1 position after it lost its leading position to GE in 2012. (However, MAKE Consulting had given the top spot to Vestas. Navigant says GE suffered from the late extension of tax credit support in the U.S. and, thus, drops to No. 5 from the top position it occupied in 2012.

– Goldwind ascends from No. 7 to No. 2, a title the Chinese original equipment manufacturer (OEM) won in 2011.

– Enercon moves up one place to No. 3 by relying on the growth of its home market, to which it supplied nearly half of the turbines installed in 2013.

– Siemens drops one position to global No. 4 in 2013 due to the slump in demand from the U.S., where it traditionally performs well.

– Gamesa maintains its sixth-place position due to strong performance in Latin America and India, despite installing only 55 MW in its Spanish home market last year.

– Suzlon drops two positions to No.7. Navigant says it was not a bad year for subsidiary Senvion (formerly Repower), but the contraction of Suzlon’s traditionally strong markets, its home market of India and the U.S. market, took a toll.

– United Power maintained its position as the world’s No.8 supplier, but the Chinese turbine vendor lost more than 25% market share at home in 2013.

– Mingyang replaced Sinovel as the global No.9 in 2013. Navigant says Sinovel continued to suffer at home during 2013 and dropped to No. 13 place.

– Nordex crept into last place in the top 10 supplier list in 2013, having successfully focused on core markets in Europe and emerging markets in Latin America and Africa.

The report says the wind power industry continues to demonstrate its ability to rapidly evolve to meet new demands in markets that face a variety of challenges, with 2013 being no exception. Trends observed in 2013 include the following:

– Offshore wind turbine size dropped slightly by 180 kW from 3,793 kW in 2012 to 3,613 kW in 2013. Navigant says this is less an indication of turbine sizes offered by the market and more the result of the specific mix of turbines that were installed in each year.

– The size of the global direct-drive market reached 28.1% of all new wind capacity installed last year, an increase from 19.5% in 2012. China’s market resurgence played a role in this, as Goldwind and XEMC are the world’s two largest suppliers of direct-drive permanent-magnet generator (PMG) wind turbines.

– Tough market conditions continued to force turbine suppliers to search for growth elsewhere. As well as investing in emerging markets in Latin America – especially, Brazil – OEMs are eyeing opportunities from the emerging markets in two of the world’s largest territories: Africa and the former Soviet Union.

– The focus on product diversification grows, with wind turbine vendors designing machines for maximum energy production in low-wind-speed areas, for operation in high altitudes or in cold climates, or for areas with blade-tip height restrictions. They are also diversifying their businesses by aggressively pursuing the rapidly growing and stable income stream of wind turbine operations, maintenance and service markets.

– Chinese utilities continue to move up the top 15 ranking of wind asset owners. Five of the top 10 in 2013 are Chinese state-owned energy companies. The top 15 wind farm owner/operators controlled around 31% of the aggregate installed capacity in the world at the end of 2013.

The report says more than 314 GW of onshore wind requiring service and maintenance was installed by the end of 2013, representing 98% of global wind turbine installations. More than half that total is now out of warranty, with responsibility for O&amp;M resting with the owner.

Demand for O&amp;M services from OEMs and independent service providers is expected to grow at 40 GW a year from 2013 onward. By the end of 2018, the volume of wind capacity off warranty will have reached 354.6 GW, representing a total market value of at least EUR 5.1 billion.

Navigant expects 250,067 MW of new global wind installations from 2013 to 2018 – a slightly higher (3.5%) expectation than forecast in last year’s World Market Update. The company says its revised forecast is explained by the following factors:

– A recovering U.S. market in the short term will provide over 12 GW of new capacity by the end of 2015, but the future after 2015 remains uncertain.

– The world’s largest wind market, China, has reached the end of its transition to a period of more stable development, which will be supported by strong political will and the commissioning of new HVDC transmission lines across China.

– A number of emerging European countries like Turkey, Sweden, Poland and Romania are performing well alongside the traditionally strong markets of the U.K. and Germany, despite policy inconsistency that is expected to have a negative impact on growth in some of those countries.

– Although a decline is anticipated in some established European markets, growth in emerging countries in Latin America and Africa, as well as a growing offshore market, is expected to redress the balance.

According to Navigant, concerns about security of electricity supply and man-made climate change continue to be the main drivers for increased use of wind energy. The report’s market prediction for the 2019-2023 period indicates an average growth rate of 6.8%. Geopolitical indicators point to both a need and a desire for more renewable energy, even though clean energy issues slipped down the political agenda in the continuing fallout from the financial crisis.

Political action to implement new decisions to deal with climate change are never guaranteed, but Navigant says markets with substantive climate policy, such as Europe, will continue strong policies supporting renewables up to the binding 2020 timeline and will continue with robust policies beyond 2020.

According to the report, the global wind industry added 36,134 MW in 2013, the first time in eight years that the sector has installed less in a given year than the year before. The size of the annual market declined 20% year-on-year in 2013, compared to market growth of 18.6% in 2012. The decline reduced the annual growth rate for the past five years to 5.1% from 17.8% in the five years ending in 2012.

Navigant says the market decline was not unexpected. Negative conditions in several key countries, particularly the U.S. and Spain, were not conducive to market growth. The aftermath of the 2008 financial crisis still continues to weigh heavily – particularly on the European markets that underpin the industry. The report says the U.S. market decline – triggered by a lack of policy consistency and a failure to renew the tax credits, which have traditionally stimulated investment – was also a major contributing factor for the global wind market depression last year. In fact, the report says the U.S. market dropped 93% in 2013, installing less than 1.1 GW installed – down from a record 13.1 GW the year before.

Other demand-side highlights include the following:

– China’s market strength propelled the Asian continent, with 19.7% growth and a 51% share of yearly global installations.

– China regained the title of the world’s largest annual market, with 16,088 MW of new wind power installed in 2013. Germany came in a distant second, with 3,237 MW, followed  by India (1,987 MW), the U.K. (1,833 MW) and Canada (1,699 MW – representing a record year for the country). The report says Spain and Italy exited the top rankings, negatively affected by regulatory change to their wind market structures.

– Penetration of wind power in the world’s electricity supply reached 2.87% in 2013.

– In the offshore market, 13 new projects were installed in 2013, adding 1,720 MW – 50% more capacity than was added in 2012. Almost 47% of new offshore capacity in 2013 was installed in the U.K., all of it supplied by Siemens. The U.K. retains its status as the largest offshore wind market, and Siemens holds on to its title of the largest offshore turbine supplier. In the Far East, China added a 36 MW offshore intertidal wind plant, while Japan added a 16 MW near-shore project.

– Global cumulative wind capacity offshore passed the 6 GW milestone in 2013 and now represents 2.1% of the total installed around the world. There are now more than 6,600 MW of offshore wind under construction in 29 projects in Germany, the U.K., the Netherlands, Belgium, China, Japan, South Korea and the U.S.

More information on the report is available here.