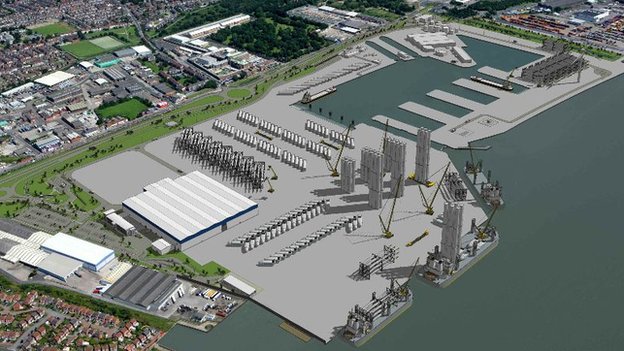 Siemens is investing more than EUR190 million (GBP160 million) in new offshore production facilities in Great Britain. Production of rotor blades for offshore wind turbines of the 6-megawatt class is planned, with a new logistics- and service centre slated for Hull. The British Prime Minister David Cameron and Michael Suess, member of the managing board of Siemens AG and CEO of the Energy Sector will reaffirm their common dedication to these projects this afternoon in Hull.

“Our decision to construct a production facility for offshore wind turbines in England is part of our global strategy: we invest in markets with reliable conditions that can ensure that factories can work to capacity. The British energy policy creates a favourable framework for the expansion of offshore wind energy. In particular, it recognizes the potential of offshore wind energy within the overall portfolio of energy production”, stated Michael Suess, member of the managing board of Siemens AG and CEO of the Energy Sector.

The offshore wind market in Great Britain has high growth rates, with an even greater potential for the future. Wind power capacity has doubled here within two years, to roughly 10 gigawatts. By 2020, a capacity of 14 gigawatts is to be installed at sea alone to combine the country’s environmental objectives with secure power supply. Projects for just over 40 gigawatts are currently in the long-term planning.

The British Prime Minister David Cameron declared: “Our constructive political environment enables us to provide new jobs for the wind power industry, together with a reliable and more sustainable energy mix.”

Siemens and its British partner Associated British Ports (ABP) will be investing a total of EUR371 million (GBP310 million) at the project sites. These investments will bolster the strong offshore market in Great Britain and will likewise stimulate the country’s job market: 1,000 will be created directly, with 550 of these in rotor blade production and 450 in Green Port Hull. Other jobs will follow in the construction industry and emerge indirectly in the supply industry.

Green Port Hull is scheduled to take up operations at the beginning of 2016, with commencement of rotor production scheduled for the summer of 2016. Full capacity of the factory is to be reached starting at mid-2017. These investments will support Great Britain in its endeavours to pursue its environmental objectives and to satisfy one fourth of its electricity needs from renewable energy sources by 2020.

Wind power and the associated service are part of the Siemens environmental portfolio. Around 43 percent of the company’s revenues are provided by green products and solutions, making Siemens the world’s largest supplier of ecofriendly technologies.