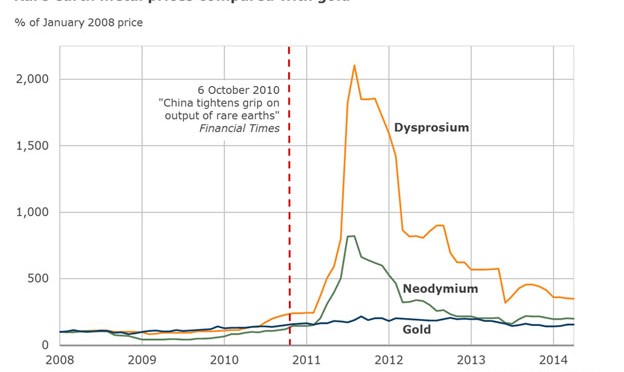 First rare-earth element discovered by Finnish chemist Johan Gadolin in 1792 after receiving a heavy mineral from Swedish village of Ytterby.
Subsequent rare-earth elements identified and isolated over a period of about 150 years.

The core group of 15 rare earths are known as lanthanides. These have an atomic number from 57 to 71 and are grouped together in the periodic table.

Scandium and yttrium – making the total number 17 – are also considered rare earths as they exhibit similar chemical properties to lanthanides. Final one to be discovered, in 1945, was the radioactive promethium, which is the rarest.

There are between 15 and 17 of them (depending how you classify them), including such exotic sounding substances as holmium, praseodymium, cerium, lutetium, ytterbium, gadolinium or – my own personal favourite – promethium.

They may be obscure but they have been transforming all sorts of industries. Wind turbine manufacture is a good example.

Henrik Stiesdal is celebrated as one of the fathers of the modern wind energy industry. He built his first wind turbine on his family’s farm in Denmark as a teenager, and has been perfecting his designs ever since.

Now he’s chief technology officer for one of the biggest wind turbine manufacturers in the world, the German engineering giant Siemens.

When you enter his generous office overlooking the company’s huge turbine factory on the windswept Jutland peninsula of Denmark, the first thing you notice is the intriguing antique clock opposite his desk.

The radioactive element promethium, is missing from his collection. Andrea calls it the “cuckoo in the nest”.

Promethium isn’t found naturally on earth, but is formed in nuclear reactors. You may be carrying a tiny trace of promethium now because it has been used in the luminous paint on some watches.

Andrea waves an ultraviolet light over his collection. Some suddenly light up in vivid fluorescent colours.

“One of the incredible properties of the rare-earth elements is that they produce different wavelengths of light – specific colours – exactly on demand,” he explains.

It turns out this property forms part of the anti-counterfeiting system used in euro notes.

Andrea takes a 50-euro note from his wallet and places this under the UV light. Bright green and blue stripes and shapes appear together with a constellation of beautiful blue and pinky-purple stars.

“Those stars contain europium,” he says, grinning broadly. “This tells me that there is someone with a sense of humour at the beating heart of the European Union.”

But the optical properties of the rare earths do more than just deter forgers. The distinctive green light in a television or computer screen is generated using terbium, while the red colour is produced by a combination of europium and yttrium (which is often treated as an honorary member of the rare earths).

But the most useful rare earth – in optical terms – is probably erbium.

The light produced by erbium is out in the near-infrared spectrum and is invisible to the human eye.

But it can send signals down optical fibres for many kilometres, which is why most of the optical fibre applications around the world use signal amplifiers made with erbium.

Rare earths are also essential for the catalytic converters that scrub the exhaust gases of cars clean and in glass polishing.

But it is the incredible magnetic properties of some of the rare earths that most of us – unwittingly – exploit most often.

“Hold this,” he orders. I clutch it in my fist.

He produces a two pence coin and places it on the back of my hand.

Even through the thickness of my hand I can feel the magnet tugging at the disk of metal.

“That is a magnet made with neodymium,” he explains. “It is 10 times as powerful as a normal iron magnet and can hold 1,000 times its own weight.”

It is no exaggeration to say that the miniaturisation of technology would not be possible without these incredible magnets.

They are a surprisingly recent breakthrough. The first magnets using the rare earths neodymium and scandium were developed only in 1982, but their discovery has revolutionised all sorts of technologies.

The tiny motors that power computer hard drives and the miniature speakers on mobile phones and laptops depend on rare-earth magnets.

Neodymium magnets are used in electric guitar pickups, MRI scanners and microwave ovens. You can even buy cufflinks that link up with neodymium magnets.

And they also hold the key to Mr Stiesdal’s challenge – getting rid of the huge gear mechanism in wind turbines.

The stronger the magnets, the easier it is to generate power at lower speeds.

An electric current is generated by induction – the electrons are driven as a magnet moves past a coil of wire. The stronger the magnet, the more the electrons move.

Down in one of Siemens’ huge engineering sheds below Stiesdal’s office, I was shown one of the company’s new gearless turbines.

It is much more compact than its forebears. The core is a ring about five metres in diameter, like a giant doughnut, which encloses the axle.

This ring is packed with 648 22cm-long neodymium magnets laced with another rare-earth element, dysprosium, which makes them much less liable to become demagnetised.

It means, Henrik Stiesdal tells me with evident pride, that the same power can be generated without any gear system at all.

The problem is getting hold of the rare earths that make this possible. More than 85% of the world’s supply of rare-earth metals comes from China.

And practically 100% of the “heavy” rare earths – at the farther end of the periodic table – come from China, including Stiesdal’s dysprosium.

China has some very rich deposits of rare earths in Inner Mongolia. And, until recently, China has not been very squeamish about the consequences of rare-earth extraction.

It is a very dirty business. Rare earths are often found with radioactive elements like thorium and uranium, and separating them out requires a lot of toxic chemicals.

Jack Lifton, founder of Technology Metals Research and an expert on rare earths, describes how, in China, the process of extraction involves leaching out the elements. They flood the high ground with chemicals, he says, and then precipitate out the metals, leaving behind a lake of carcinogenic waste fluids.

In recent years China has been trying to clean the industry up. But it can’t actually stop production, because many of the hi-tech industries at the heart of the Chinese economy rely on rare-earth supplies.

Just how dependent the entire world is on Chinese rare earths became very clear at the end of 2010 when China threatened to restrict supplies. The spike in rare-earth prices was very dramatic – up to 3,000% for some of them.

Prices have since fallen back, but the shock was enough to prompt companies to begin to explore producing and refining rare earths elsewhere in the world.

And how did Stiesdal respond to this shock?

“The neodymium exists in large abundance outside China. There are a couple of companies outside China that could keep us running for thousands of years.”

“It turns out you can tweak the way you deal with your alloy so you need less. In today’s magnets we have 0.7% dysprosium, and in a few years it will be all gone.”