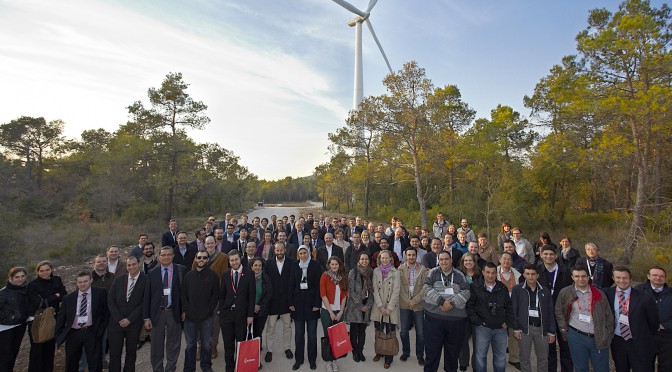 ACCIONA Energía announced its new business orientation during the recent European Wind Energy Fair (EWEA2014) in Barcelona. A focus on emerging markets, cooperation with third parties as either partners or customers, and boosting sales of wind turbines are the three basic drivers in the new phase, in which the company will continue to work on improving its operational efficiency.

In a media briefing during the Fair, ACCIONA Energía CEO Rafael Mateo explained that the company will focus on emerging markets “where we can grow our revenues with less investment, and seek partnerships with local partners in which we can contribute our technological capacity”.

Speaking about the plan to incorporate a financial partner for ACCIONA Energía’s international stock package (2,273 MW attributable to the company), Mateo indicated that a large number of offers had been received and that the company expects to complete the process in the first semester of 2014. He said that “ACCIONA Energía can contribute its status of qualified operator to a financial partner, as there are not many companies in the world that are efficiently operating an asset base the size of ours, i.e. 8,500 MW of renewables”.

The event in Barcelona highlighted the fact that ACCIONA Energía has boosted its range of services and projects for customers, in the form of EPC contracts that have either been signed or are in the final phase of negotiation, for a total of 427 MW in wind and photovoltaic power in Australia, Canada, Mexico and Chile.

As for the company’s own developments, in 2014 and 2015 ACCIONA Energía will complete the construction of projects currently in progress – totaling 324 MW (195 attributable) – in South Africa, Costa Rica and Chile.

ACCIONA also took advantage of its presence in EWEA 2014 to showcase the commercial success of its 3-megwatt turbine. In 2013 and 2014 to date, ACCIONA Windpower, the group subsidiary company that manufactures wind turbines, has signed or is completing negotiations for contracts totaling 1,560 MW.

88% of this capacity corresponds to other customers and 12% to the ACCIONA group. This also highlights the change of strategy, now more customer-focused. Brazil is the main destination market for these turbines (43% of the total), followed by the USA-Canada (25%), Mexico (16%), South Africa (9%), Turkey (4%) and Chile (3%).

ACCIONA Windpower Executive Director José Luis Blanco informed the media that the company implemented a plan to improve the competitiveness of its turbines a year ago, with a commitment to reduce their energy cost by 25% by the end of 2014. The objectives of this plan are being achieved according to forecasts. As for where ACCIONA Windpower will manufacture its turbines in the future, Blanco stated that “our customers demand the lowest energy cost for the markets they compete in, and our objective is to create the best possible supply chain that complies with the requirements of each country”.

ACCIONA’s participation in EWEA2014 included the organization of a technical visit to the Serra de Vilobí II wind farm, located in Tarrés (Lleida). Around a hundred international wind power experts interested in learning about the operation of the AW3000 in the field took part in the visit. In this case, they observed the version with a 116-metre-diameter rotor on a concrete tower with a hub height of 100 meters.

ACCIONA’s stand in the Fair was busy all the time, with the presence of a number of senior managers and experts from the company in conferences and specialist sessions. In this respect, we would highlight the presence of Rafael Mateo on the panel of CEOs of the main European wind power companies, in which ACCIONA Energía’s top executive expressed his conviction that wind power “will be the technology that replaces fossil-based energies in the future”.