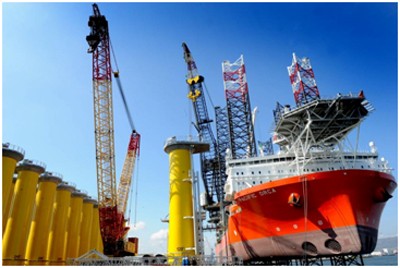 The UK’s offshore wind industry could support 150,000 jobs, provide £6.7bn of economic value, and prove one of the country’s most successful export industries, but only if it can deliver on plans for rapid expansion over the rest of the decade.

That is the conclusion of a major new report from the government-backed Offshore Renewable Energy Catapult (OREC) published yesterday, which details how the offshore wind industry and related marine energy industry could provide a much-needed boost to the UK’s heavy manufacturing sector.

The report, entitled Generating Energy and Prosperity, draws on supply chain data from BVG Associates and analysis from the Fraser of Allander Institute to assess two development scenarios for the UK’s offshore wind industry: one that delivers at the upper end of government projections and provides 15GW of capacity by 2020 and one that delivers the 8GW expected at the lower end of the government’s estimates.

Using so-called input-output (IO) model analysis the report concludes that its “accelerated growth” path would see 15GW deployed, while providing £6.7bn of gross value add (GVA) to the UK economy in 2020, creating 34,000 direct jobs and supporting 150,000 jobs across the wider economy. The expansion would represent a step change for the industry, given that it currently employs around 5,000 people directly, supports 20,000 jobs in total and contributes around £1bn a year to the UK economy.

However, the scaling up of the industry envisaged by the report is dependent upon the UK capturing a greater share of the supply chain for offshore wind farms at the same time as slashing the cost for the technology. The report acknowledges that currently only about 40 per cent of the lifetime costs of operational UK offshore wind farms will be spent domestically, as most large components are imported. The UK is increasingly competitive in the provision of cables, electrical systems, installation services, and operations and maintenance, but the big ticket items such as turbines and foundations tend to be provided by international suppliers. The report admits that this reliance on imports presents a challenge to the realisation of the “accelerated growth” scenario as “turbine manufacturing provides the single biggest contribution to GVA by 2020, with some £2.1bn in the accelerated 15GW scenario”.

The report also acknowledges that the failure to deliver on the accelerated growth scenario and secure investment in the industry’s supply chain would result in a “gradual growth” scenario, whereby the sector delivers just 8GW of capacity by 2020, resulting in £2.3bn of GVA, around 11,000 direct jobs, and 50,000 jobs supported across the economy.

In essence, the report confirms the Catch 22 faced by the industry, whereby delivering 15GW of capacity by 2020 is dependent on bringing the cost of offshore wind energy down, which is itself dependent on attracting the supply chain investment that can only be justified if the industry does indeed deliver 15GW of capacity, as opposed to the 8GW some fear. It is precisely the same conundrum that Siemens recently confirmed it faces as it tries to decide whether to move ahead with ambitious plans for a new turbine manufacturing plant in Hull.

However, the report also highlights the scale of the potential long-term economic gains that are on offer if the UK does realise the “accelerated growth” scenario, providing supply chain and infrastructure investment as well as the creation of a major new services industry.

“The accumulation of know-how in the effective operation and maintenance of assets will provide an exportable service industry similar to that achieved by the oil and gas industry over recent decades,” the report predicts. “It is this area that we believe will make the biggest long-term contribution to offshore wind GVA, as when the growth in new installed capacity ultimately slows, an increasing proportion of total expenditure will be operational.”

Writing in the foreword to the report, OREC chief executive Andrew Jamieson said the only way for the industry to maximise its economic potential is by stepping up efforts to reduce the cost of offshore wind technologies. “Key to unlocking this value is driving cost reductions to ensure economic success for the industry,” he said. “Technology innovation will play a major role in delivering this opportunity. It can reduce the cost of offshore renewable energy and enhance the competitiveness of UK businesses, in so doing creating an industry with the skills, services and know-how to not only create extensive economic benefit and employment but also to export our capabilities around the world for decades to come.”

He added that OREC – which officially opened its Glasgow offices yesterday, bringing the number of government-backed Catapult centres to seven – would play a key role in supporting projects that aim to slash the cost of offshore wind energy. “At ORE Catapult, we are working with UK industry, academia, supply chain, government and SMEs to drive forward innovation, joining up the excellent work already underway, focusing innovation on the UK’s strengths and where the economic opportunity is greatest, in order to realise that goal,” he said.

However, trade association RenewableUK said the report also highlighted the need for the government to provide the kind of stable and supportive policy framework that is required to convince investors to support the offshore wind supply chain.

“This new report makes a cast-iron case for maximum political support and investment in the offshore wind and marine energy sector,” said RenewableUK’s director of external affairs, Jennifer Webber. “But the jobs and the UK-wide economic reboot won’t happen to the full unless government policy is 100 per cent supportive. To make the most of our world-beating resources, the offshore renewables sector needs certainty on policy, with government standing four-square behind us to achieve growth at a brisk pace. We can’t risk confidence melting away, or other European countries will leap in and grab as many of the manufacturing opportunities as they can.”

Specifically, RenewableUK is warning that investor confidence could be dented if, as widely reported, Chancellor George Osborne opts to freeze the carbon price floor as part of next week’s Budget. “The industry is calling on him not to freeze the Carbon Price Floor, as that would send the wrong signal about the government’s commitment to encouraging low-carbon generation,” said Webber. “Incentives to wean energy users off fossil fuels and make clean power more attractive should be promoted rather than scaled back.”

As Siemens potential multi-million pound investment decision makes plain, the UK will only maximise the economic gains from its world-leading position in offshore wind if confidence in the government’s 15GW projections can be instilled. And as OREC’s new report makes equally plain, up to £6.7bn a year of economic gains now hang in the balance.