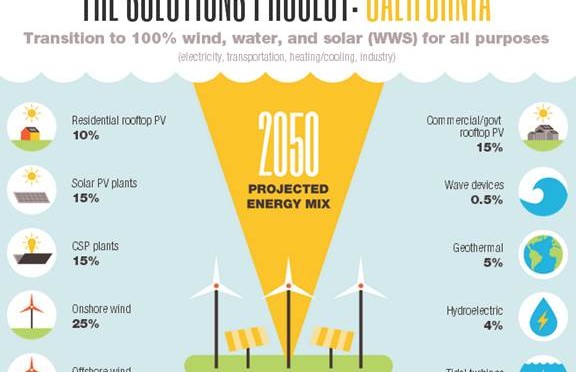 The clean energy sector is awash in scenarios that suggest that 100 percent of our energy needs can be met with renewables. While the realities of implementation are far more difficult than the reports suggest, these models can serve as a helpful exercise in imagining what is possible.

To get there, all new generation must come from what Jacobson calls the wind, water and sunlight (WWS) electric power technologies by 2020, according to The Solutions Project study. At least 80 percent of existing energy must then be replaced by WWS by 2030 for the U.S. to reach 100 percent renewables by 2050.

“Every new power plant should be a clean renewables plant,” Jacobson said. “If every new car sold today was an EV, in fifteen years almost every car would be electric.”

On average, renewables plus achievable energy efficiency could cut total energy demand 37.3 percent, the study concludes. Over 85 percent of that would be from electricity use. The build-out would take about 0.65 percent of U.S. land, according to the scenario.

Battery electric vehicles (BEVs), hydrogen fuel cell vehicles (HFCVs), and hybrids would make up the transportation fleet in 2050; the hydrogen would only be produced from WWS-generated electricity; trucks and buses could be hybrid BEV-HFCVs or pure HFCVs. Jacobson said buses could be solely BEVs if fast battery swapping or supercharging becomes available.

Jacobson’s conclusions are similar to the findings of work done by University of Delaware researchers in 2012.

The plan eliminates nuclear energy because of its energy intensity and time horizons. According to Jacobson’s analysis, the fossil fuels used in mining and uranium refining are nine to 25 times the amount used by wind energy per unit energy produced. In addition, a nuclear facility takes ten to nineteen years to get into operation, while WWS projects take only two to five years.

Liquid biofuels are not included because “the effective cost of a liquid biofuel is four to five times that of the electric power needed to move an electric car the same distance.”

The resource mix would be different state by state, as reflected in studies focusing on California, New York, and Washington and by an interactive U.S. map created for the new report. 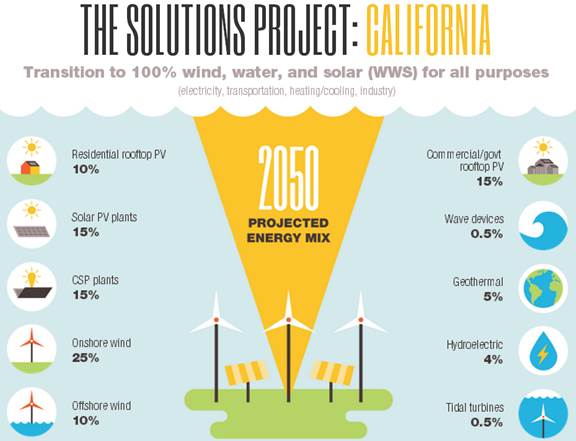 The California mix is 55 percent solar and 35 percent wind, Jacobson said. The bulk of the solar would be commercial, industrial and government-scale installations and utility-scale projects. Another 10 percent would come from residential rooftops.

“That requires 19 million systems averaging 5 kilowatts each. But there are only 11.5 million residential rooftops of all kinds, including single and multiple unit structures. By 2050, there will probably be 17 million,” Jacobson said. “The bottom line is that we are saturating the rooftops, especially because not all homes will accommodate systems.”

Also, he added, rooftop solar is presently more expensive than utility-scale solar. “But our plan is flexible. If that changes, there can be more rooftop solar. We have laid out just one scenario. Others are possible, as long as they are based on wind, water, and solar.” 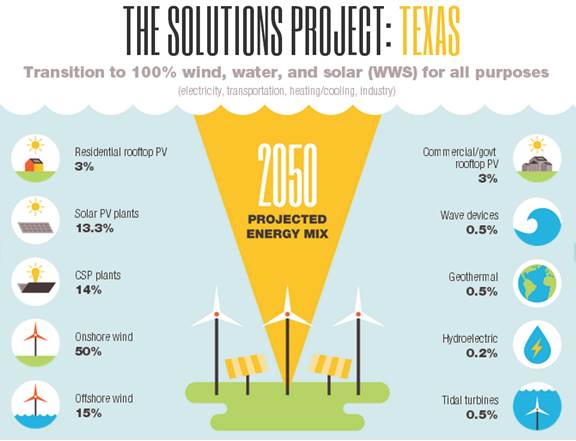 Jacobson’s work includes a list of recommended policies that would support getting to 100 percent renewables, but leaves the final decisions and options up to each state’s leadership. 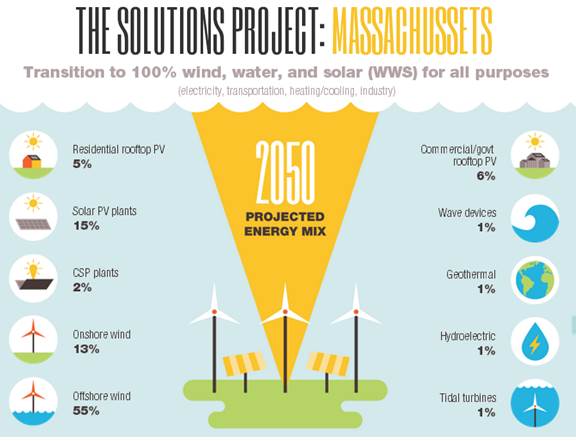 Nationally, the plan would create an estimated 5.1 million construction jobs and 2.6 million permanent annual jobs. “We are extremely confident there will be net job gain nationally because jobs in renewables are local,” Jacobson said. “Solar construction produces far more jobs per kilowatt-hour than traditional generation.”

Jacobson’s projections for 2030 suggest that the cost advantages will go to renewables. The levelized cost of energy for WWS technologies are expected to be $0.07 to $0.11 per kilowatt-hour, including the cost of local new transmission, Jacobson’s research concludes. Fossil fuel LCOE projections fall in the $0.12 to $0.16 per kilowatt-hour range, excluding externalities.

The cost of new long-distance transmission is projected to be $0.01 per kilowatt-hour for HVDC lines of between 1,200 and 2,000 kilometers.

To get to these savings, aggressive policies need to be put in place immediately, Jacobson said. When the prices come down, the policy impacts can be reduced.

“This is technically and economically feasible,” Jacobson said. “It just requires overcoming political barriers. People can do things like using energy-efficient light bulbs and appliances, weatherizing, buying an electric car, and putting solar on their roofs. They can also push their local governments for policies that help form their energy future.”