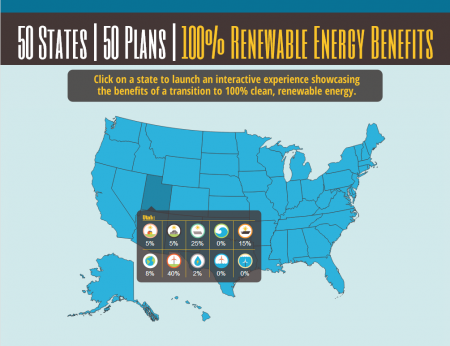 One of the greatest promises of the high-tech future, whether made explicitly or implicitly through shiny clean concept sketches, is that we will have efficient energy that doesn’t churn pollutants into the air and onto the streets.

But here in the present, politicians and even many clean energy advocates maintain that a world run on hydrogen and wind, water and solar power is not yet possible due to technical challenges like energy storage and cost.

Yet Stanford University researchers led by civil engineer Mark Jacobson have developed detailed plans for each state in the union that to move to 100 percent wind, water and solar power by 2050 using only technology that’s already available. The plan, presented recently at the AAAS conference in Chicago, also forms the basis for The Solutions Project nonprofit.

“The conclusion is that it’s technically and economically feasible,” Jacobson told Singularity Hub.

The plan doesn’t rely, like many others, on dramatic energy efficiency regimes. Nor does it include biofuels or nuclear power, whose green credentials are the source of much debate.

The proposal is straightforward: eliminate combustion as a source of energy, because it’s dirty and inefficient. All vehicles would be powered by electric batteries or by hydrogen, where the hydrogen is produced through electrolysis by using natural gas. High-temperature industrial processes would also use electricity or hydrogen combustion.

The rest would simply be a question of allowing existing fossil-fuel plants to age out and using renewable sources to power any new plants that come online. The energy sources in the road map include geothermal energy, concentrating solar power, off-shore and on-land wind turbines and some and tidal energy. All but tidal energy collectors are already commercially available.

“The greatest barriers to a conversion are neither technical nor economic. They are social and political,” the AAAS paper concludes.

Common political wisdom has it that, while clean energy is a nice idea, powering our economy with wind, water and solar power would require an enormous amount of land allotted to production and would push energy prices up beyond the reach of average consumers.

But according to Jacobson and his colleagues, the reverse is true. Less than 2 percent of United States’ land mass would support all of the wind, solar and hydroelectric power generation required to meet energy demand. That includes the space between concentrating solar arrays or wind turbines.

Clean energy would save an average American consumer $3,400 per year than the current fossil fuel regime by 2050, the study lays out. That’s because the price of fossil fuel rises regularly, but with clean energy — where raw materials are free — once the infrastructure is built, prices would fall.

For example, in California, the researchers found that it’s already possible to use wind, water and solar energy to meet demand 99.8 percent of the time. Similarly, in other states, it’s only the final percentages or fractions of percentages that would require technologies that are not yet mass produced, such as, in Louisiana, wave “mills” that turn the ocean’s power into electricity.

With the mercurial climate already causing major damage around the world, the plan claims it would save the U.S. economy $730 billion a year in climate-related costs. It would also avert roughly 59,000 lives deaths from air pollution every year and save $166 – 980 billion a year in health care costs.

Jacobson has previously mapped out a similar proposal for the global energy market, including China. A related plan with a greater emphasis on efficiency was recently released by the World Wildlife Fund.

Both domestically and internationally, transmission lines carrying energy between states or countries prove one of the greatest challenges. With natural energy sources, electricity needs to be more mobile in order to make sure that even when there’s no sun or wind, a city or country can import energy from somewhere were there is.

The biggest problem is who should pay to build and maintain the lines.

“I’m pretty sure the proposal will be adopted,” Jacobson said. “I’m just not sure it’ll be adopted by 2050. It has to be adopted in the sense that fossil fuels are limited and they’ll eventually run out, so what are the other options?”