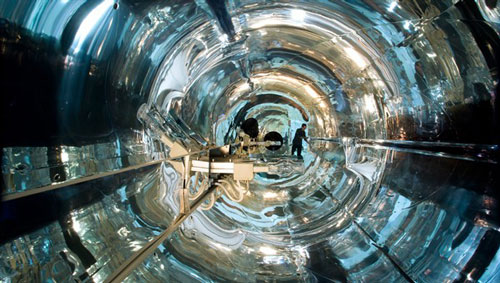 The German Aerospace Center is testing the performance and durability of reflectors and receivers for concentrated solar power (CSP) plants in Ouarzazate, Morocco and in Bokpoort, South Africa.

The German Aerospace Center (Deutsches Zentrum für Luft- und Raumfahrt; DLR) is testing the performance and durability of reflectors and receivers for concentrated solar power (CSP) plants in Ouarzazate, Morocco and in Bokpoort, South Africa. The tests that the DLR researchers developed together with the Spanish energy research centre CIEMAT (Centro de Investigaciones Energéticas, Medioambientales y Tecnológicas) are among the tender specifications issued by general contractor SENER for selecting suppliers in the construction of the parabolic trough power plants.

These quality controls are the first to permit an assessment of concentrating solar power plant component quality and longevity.

The concentrated solar power plant is the first in the Moroccan Solar Plan, which is scheduled to deliver 20,000 megawatts by 2020. Work on the parabolic trough power plant has been ongoing in Ouarzazate since May 2013; in three years it will be connected to the power grid and will deliver 160 megawatts. This kind of power plant uses parabola-shaped reflectors to concentrate the sun’s rays; the receiver tube runs along the reflectors’ focal line. The tube captures the solar radiation, converting it into heat. The efficiency of a power plant and its capacity to delivery electricity without signs of aging is strongly determined by the quality of the reflectors and the receiver tubes, as part of the principal equipment in the solar field. SENER sees the tests as an important step toward successful completion of the solar power plant: “These DLR quality controls enable us to identify the best component manufacturers for the power plants. They also help us to make accurate assessments of the power plants’ performance and durability.”

Researchers at the DLR Institute of Solar Research test the receiver performance at the QUARZ Center in Cologne, investigating the percentage of sunlight that the tubes convert into heat and how much thermal energy they emit to the environment instead of transporting it on towards the evaporator and turbine. The researchers apply the reflector tests to find out exactly how much solar radiation is reflected onto the receiver tube. “These quality tests are standard procedures that DLR has conducted for many years on behalf of manufacturers,” says Johannes Pernpeintner, project manager at the Institute.
Beyond the quality tests and before deciding on the tube and reflector manufacturers, general contractor SENER was keen to know how well the components would survive 25 years of service life and which signs of ageing should be expected. So the general contractor joined with DLR and CIEMAT to define test methods and quality standards. One of the ways in which the researchers induced accelerated ageing in the receiver tubes was to overheat them to 480 degrees Celsius – instead of their operating temperature of 400 degrees Celsius – for a period of 1000 hours. Additionally, the material must survive 100 cycles of overheating and subsequent cooling down during the experiments. Long-term tests are also applied to the bellows fitted to the receiver tubes, a flexible, concertina-like hose section intended to maintain the vacuum within the pipes as they expand in the sun and then contract. “We stretch and compress the seals at least 10,000 times during our mechanical test; this is equivalent to what they would have to withstand over a service life of around 25 years,” says Pernpeintner, describing the method. The tests are conducted both in the QUARZ Laboratory in Cologne and in the OPAC laboratory at Plataforma Solar de Almería, which DLR operates together with CIEMAT.
Reflector ageing is also investigated in the OPAC laboratory. There, the researchers observe the reflectors’ mechanical wear, caused for instance by sandstorms, and expose the material to a series of climate chamber tests. The standard dictates that tests are conducted on a 10 by 10 centimetre reflector section, but the researchers also put entire parabolic troughs through their paces in salt fog tests carried out at TÜV Rheinland in Cologne, investigating corrosion at the reflector edges. “The innovative ageing tests in particular allow us to provide manufacturers with valuable feedback, so they can improve their own product quality standards,” says Pernpeintner. “The investigations are an important step toward standardising ageing tests.”

DLR is the leading German research institution in the field of thermal power plants, assuming an architect role in the development and qualification of associated technologies. The German Federal Ministry for the Environment, Nature Conservation, Building and Nuclear Safety funds the research and development of applied test methods. SENER is a Spanish engineering and construction company with extensive experience in the development of thermosolar plants as technology provider and general contractor that leads the market in the construction of solar power plants. The company is charged with constructing the power plants in a joint venture with ACCIONA and TSK from Spain for ACWA Power from Saudi Arabia. The Spanish energy research centre CIEMAT is a public sector institution that operates Europe’s largest test systems for solar power technologies, Plataforma Solar de Almería.