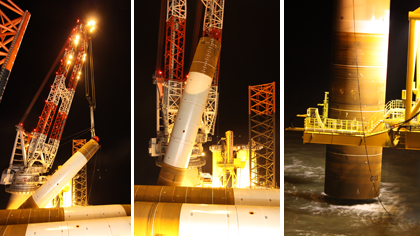 The first monopile foundation was installed by GeoSea Innovation, one of the largest installation vessels in the world.  The Innovation carried out the first five foundations to the site from the load out port in Aalborg, Denmark. The monopiles – which have a diameter of 6.5 metres and a weight of up to 800 tons – provide the base for the 6 megawatt (MW) turbines which will be installed later this year.

“This is a significant point on the project, and the first foundation installed really kicks off a critical time for construction.  Work now moves into a very busy and complicated phase over the coming months as we continue to install foundations, get ready to receive and install the offshore substation, begin to lay the cables that connect the turbines to the national grid, and then later in the summer, begin the installation of the turbines themselves.”

Construction is being managed from DONG Energy’s office in the Fish Dock, Grimsby, by a team of around 50 people.  Work is also currently underway onshore at the Royal Dock in Grimsby to construct the permanent home for the Operations and Maintenance team who will service the wind farm over its 25 year lifetime.

The Westermost Rough offshore wind farm marks the first time that the next generation Siemens 6MW turbine will be used on a commercial scale – an important step on DONG Energy’s cost of energy reduction strategy. The wind farm will have a capacity of 210MW generating enough electricity to power approximately 210,000 homes.

Situated approximately 8km off the Holderness coast, the Westermost Rough site is one of two offshore wind farms that DONG Energy is currently constructing in the UK along with West of Duddon Sands on the west coast.  The wind farms, which will be operational in 2015 and 2014 respectively, represent more than 500MW of green electricity which will be added to the UK Grid.