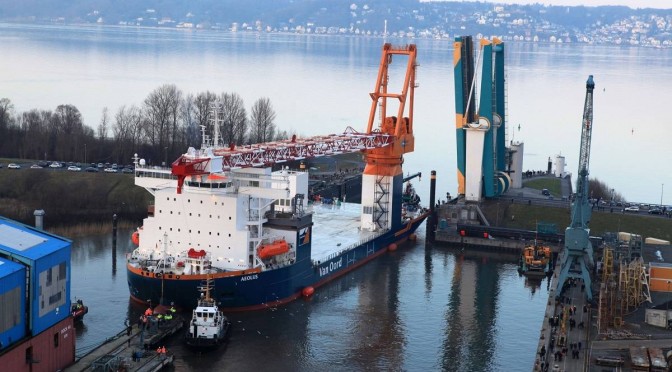 It is a first in the German shipbuilding industry; the Aeolus, the first jack-up vessel for offshore wind farms designed and built in Germany, which was constructed at Sietas Shipyard for the prestigious Dutch marine engineering company Van Oord, has left the shipyard.

Having passed through the Este barrage of Hamburg port, the jack-up vessel now travels along the river Elbe to Bremerhaven.

Berthold Brinkmann, administrator at Sietas Shipyard said, “I am proud of what the employees at Sietas shipyard have accomplished with this ship. They have always put in the maximum effort in the course of the insolvency process, and as a result a highly complex special-purpose vessel has been produced for demanding offshore wind farm projects. At the same time I would like to thank the company Van Oord and in particular Director, Peter Bunschoten for their trust in Sietas shipyard with this order during the ongoing insolvency process. The vessel is proof of the efficiency and internationally competitive expertise in construction and building services at Sietas Shipyard. It is the first time a special-purpose ship such as this has been developed and built at a German shipyard. Sietas and Van Oord have reached a milestone in German shipbuilding today.”

Dr. Tobias Brinkmann negotiated and finalized the new Van Oord construction contract during the Sietas insolvency process for the administrator along with Director Peter Bunschoten and Legal Counsel Ingrid Pieters, both from Van Oord. Sietas Shipyard then built the ship without any public funding or loans.

Design and building phases
Following the initial construction phase, the steel work for the hull was first completed on a building platform in the dock at Sietas Shipyard. The jack-up vessel was then removed from the platform so that it floated in the dock for final assembly. In recent months the deckhouse, containing the bridge, cabins for the crew and a kitchen, was erected, as well as four so-called jack-houses, each containing the hydraulics and the lifting system for the stilts on which the ship can be raised when at sea. In the last step, the crane was installed. It comes from the former Sietas subsidiary Neuenfelder Maschinenfabrik (NMF), now part of the TTS Group.

With commissioning, the construction of the ship has now been completed. The special dimensions of its four stilts, each 84 meters in length, and their “shoes” mean that they have to be fitted outside of the port of Hamburg.

During the construction period Sietas Shipyard also worked closely with the Ministry of Economic Affairs of the Free and Hanseatic City of Hamburg and Hamburg Port Authority (HPA), which kept the dock and access from the river Este to the river Elbe clear by dredging.

About the jack-up vessel
The Sietas jack-up vessel has been developed for use in offshore wind farms. It has a carrying capacity of up to 5,600 tons and can work safely in water depths of up to 45 meters. It can load itself, has DP2 equipment (Dynamic Positioning System 2) that positions it very precisely, keeping it stable even in heavy seas, and a jacking system with four stilts that are 84 meters long, each weighing around 1,000 tons and with a diameter measuring 4.5 meters. This means it can stand high above the water surface and ensures a safe working position for installation tasks on the high seas.

The innovative special-purpose vessel is 140 meters long and 38 meters wide, its moulded depth amounts to 9.12 meters, its draught to 5.7 meters. Its speed during service is 12 knots. The diesel-electric drive with four sets of generators delivers a total of 20,000 kilowatts. The special offshore crane can lift a 900-ton load with a jib reach of 30 meters and up to a height of about 120 meters above the water. The installation ship will accommodate 74 crew members during its deployment at wind farms.
In July 2014 the Aeolus will go off on its first charter. It will be used in the construction of Eneco Luchterduinen wind farm off the coast of the Netherlands.