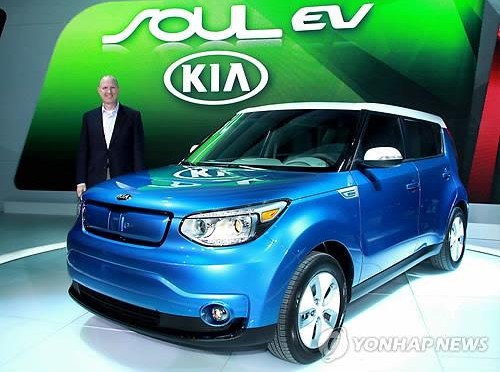 Sources said the plan is to make electric vehicles (EV) that cost under 30 million won (US$27,900) and travel at least 300 kilometers on a single power charge by 2020.

Seoul has already earmarked 130 billion won to be used until 2018 to make EVs and next-generation energy storage systems so that 75 percent of all rechargeable batteries can be made in the country without foreign assistance. The present self-sufficiency rate stands at around 20 percent.

Key to that is the development of a high-density lithium-ion battery, with a master plan to be drawn by the Ministry of Trade, Industry and Energy by March. Making high-endurance, cheap batteries is critical because they account for roughly 60 percent of an EV’s price tag.

At present, EVs made by U.S. carmaker Tesla Motors Inc. have a range of up to 370 kilometers, which is competitive vis-a-vis conventional cars with an internal compression engine, but such EV models have a prohibitive base sticker price of $63,000, making them beyond the pockets of many consumers. Tesla reported sales reaching 2,000 units per month.

The Soul EV made by South Korea’s Kia Motors Co., unveiled recently at a U.S. auto show, claims to have a range of 148 kilometers on a single change, with exact pricing yet to be released.

Industry observers said that the ministry’s initial goal is to build on the battery model employed by Tesla, with emphasis placed on cutting costs while providing greater endurance and quicker recharge time. It will also take steps to enhance battery safety. The Tesla batteries are made by connecting some 3,000 rechargeable batteries to form a single power unit.

“South Korea enjoys considerable competitiveness in the rechargeable battery sector, and if the government joins forces with carmakers and others engaged in the business sector, there is no reason why the country cannot come up with an affordable battery pact,” a source said.

Hyundai Motor Co. and Kia, the country’s two largest carmakers, are engaged in making clean, electric-powered vehicles that can meet more stringent global emission standards. LG Chem Ltd. and SK Innovation Co., as well as many smaller-sized companies, all have technological know-how in this sector and can provide input in the R&D effort.

The concerted effort should allow South Korea to reduce its gap with Japan, which leads the world in rechargeable batteries for cars.

Local companies and state labs are expected to concentrate on such areas as voltage stabilization systems and EV batteries that can be recharged under most weather conditions. Tests have shown that the current line of batteries used in EVs do not perform well, particularly in cold weather.

Once the original target range is reached, South Korea wants to expand the endurance of EVs to 500 kilometers on a single charge.

Related to EV market estimates, the Korea Automotive Research Institute said some 350,000 electric cars may be sold this year worldwide, with numbers expected to jump seven-fold to 2.66 million by 2020.