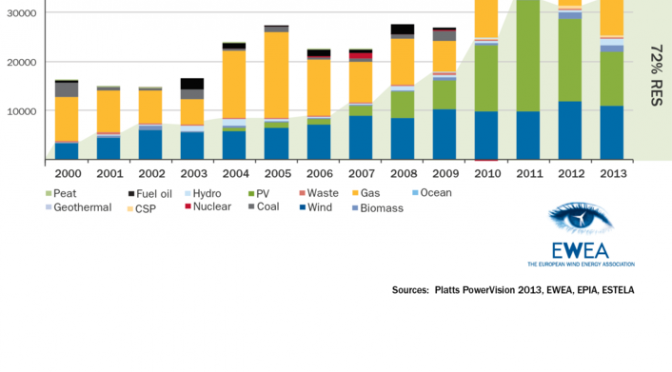 “The European Parliament has again shown it is the most forward-thinking of the institutions. It has resisted lobbying from backward-looking organisations and voted on the basis of facts, namely that an ambitious renewables target can provide 570,000 more jobs, €500 billion in fossil fuel import savings, and lower energy costs for energy intensive industries”, said Stephane Bourgeois of the European Wind Energy Association (EWEA). “This enlightened result is a kick in the teeth for the European Commission and its bloodless 2030 proposal published last month”, he pointed out. “Heads of State must pay heed to the MEPs and agree an ambitious mandate including a renewables target of at least 30% binding at national level in March.” MEPs adopted the report by 341 to 263 votes. The positive plenary vote follows the positive energy and industry, and environment committee votes in January.
Renewable energy associations across Europe had criticized the European Commission’s 2030 proposals as unambitious, a characterization echoed by MEPs. The EC’s proposed 27% renewable energy target is only 7% higher than the 2020 mandate of 20%, and came after EU member states led by the UK had pushed for the removal of the renewable energy target from 2030 goals.Eight other EU member states including France, Germany and Italy had called for strong and binding targets, as had the center-left Progressive Alliance of Socialists and Democrats, the second-largest group in the EU parliament.

However, the European Parliament’s 341 votes in favor of the stronger targets shows that the measure has support from parties beyond the Social Democrats and Greens. The European Parliament resolution adopts a report by MEP Anne Delvaux (EPP, BE), who like EC President Barroso belongs to the center-right European People’s Party grouping.

The report’s other author, Konrad Szyma?ski (ECR-PL), withdrew his name before the report was adopted. Szyma?ski stated his opposition to the stronger greenhouse reduction targets.

Find out more information on 2030 targets.