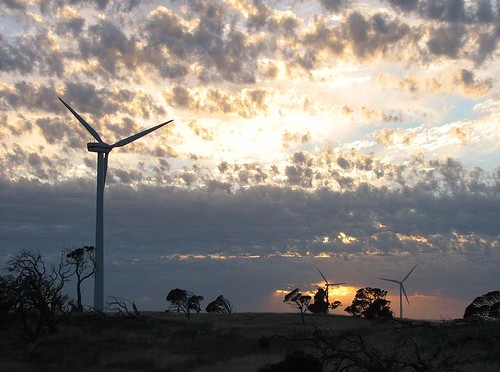 Wind energy generation is on the rise in the states surrounding Arkansas, and the renewable resource is seeing more use from some of the state’s utility companies.

It’s spending about $2.8 billion of a 10-year, $6.2 billion capital improvement plan to upgrade transmission lines throughout its footprint, much of which will benefit the company’s wind portfolio. It’s also planning to add 2,000 megawatts to the 8,000 it already uses.

Or consider Arkansas Electric Cooperative Corp., which is bumping its wind generation from 51 megawatts to 201 by the end of 2014.

In 2012, wind installations generated 3.5 percent of the U.S. electricity supply. The same year, total wind capacity increased by 13,100 megawatts, bringing the country’s capacity to about 60,000 megawatts, second only to China.

For context, a single one-megawatt wind turbine can power 240 to 400 homes in the U.S.

But whether Arkansan taxpayers see the benefits of that increase depends on where they live and whether utilities can obtain wind energy at competitive rates.

For example, Arkansans living in areas served by Entergy Arkansas Inc. don’t get any of their electricity generated by wind.

“EAI has no wind resources in its generation portfolio, in large part because we already have the cleanest portfolio in the state,” said Julie Munsell, a spokeswoman for the utility.

“Also, we believe it is important to keep rates low for our customers,” she said. “In the recent past, we have considered proposals from wind producers, but the cost was significantly higher than other generation options.”

She said the company this year will again seek proposals for renewable sources, including wind, and will consider them if they are “economic.”

It’s a different story, however, for those that live in the parts of Arkansas served by cooperatives.

Keith Sugg, vice president of integration for Arkansas Electric Cooperative Corp., said the utility receives 51 megawatts from a wind farm in Kansas, and the company has been using it for a couple of years.

By the end of 2014, he said, the utility will begin a contract with another wind farm that will increase its wind generation to 201 megawatts.

From a size perspective, Sugg said, the company has a total of a bit more than 3,000 megawatts from all generation sources.

“So [wind] in itself isn’t significant,” he said.

Sugg said wind energy is attractive to AECC because the contracts allowed the utility to use it under a fixed price over several years, which can help lower wholesale rates for member cooperatives around the state.

Still, he said, if the “prices were out of reason,” wind would be factored out, just as it was for Entergy.

“If we could provide [energy] for members less expensively, we would not spend members’ money to say, ‘Oh, look, we have wind,’” Sugg said. “So we’re doing it because we believe it’s in the best interest of our members. All else being equal, if we had fossil generation available and wind available and the [prices] were identical, we would pick the one with lesser environmental impact.”

But wind, Sugg, said, still has its own set of problems, accounting for why it doesn’t make up more of the utility’s generation portfolio.

“You would not want a system where all the generation was wind-powered,” he said. “What do you do when the wind stops? You have to have enough that’s dispatchable — i.e., controllable generation — if and when the wind decides to stop.”

Also, since the generation level of wind is variable, AECC employees would need to react to increased or decreased production by in turn increasing or decreasing other forms of generation to balance out the power.

“But with a large enough total system with wind integrated into it, it can be beneficial,” Sugg said, “because you have other generation that’s available to move or compensate for fluctuations.”

So for AECC, the value of wind, he said, is ultimately that it can displace other fuel sources like coal or natural gas.

Lanny Nickell, vice president of engineering for SPP, said the company has about 8,000 megawatts of wind resources connected to its regional grid.

Like AECC, all of SPP’s wind generation comes from outside of Arkansas.

“The majority of our wind, in fact almost 75 percent of the wind in our region, is from Oklahoma and Kansas,” Nickell said.

“We’ve got some wind in Texas, at least the part of Texas that we cover, and some in Nebraska, and that comprises the majority of the wind in our region.”

He said SPP’s current wind resources represent about 10 percent of its total mixture of energy sources.

Like AECC, SPP is planning to build that up.

He said SPP’s region could eventually generate up to 90,000 megawatts of wind energy. Wind is “a very economical” source of energy, Nickell said, especially after federal tax credits help to ease the steep capital investment required to build the turbines.