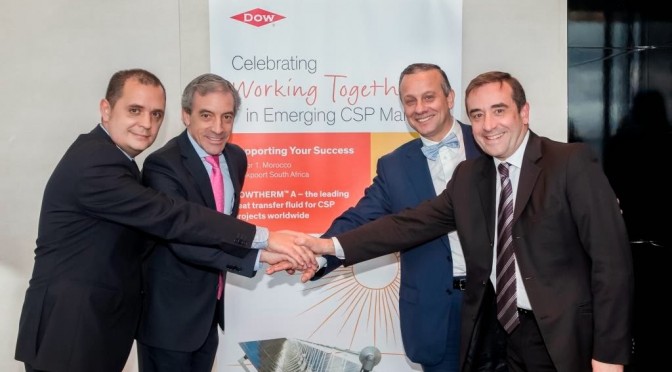 “As new regions begin to embrace and invest in CSP projects, they are relying on proven technological leaders to create world-class power generation facilities. As a leading supplier of heat transfer fluids for CSP, we are ready to grow with the solar power industry”, said Juan Antonio Merino, Dow Commercial Vice President for Europe, Middle East and Africa. “Dow is a company with operations worldwide and is uniquely positioned to serve our partners in all projects regardless of where they are executed”, added Merino.
Dow announced that it will supply DOWTHERM™ A Heat Transfer Fluid to two new CSP plants under construction, Noor 1 in Morocco and Bokpoort in South Africa. A consortium composed of Spanish companies Acciona, SENER and TSK were awarded the Engineering Procurement and Construction contract for the Acwa Power-owned plants.
Today, more than 35 CSP plants filled with DOWTHERM™ A provide enough electrical generation capacity to meet the needs of more than 1 million homes at a savings of close to 4 million metric tons of CO2 emissions per year.
“The award of Dow heat transfer fluid to the Noor 1 and Bokpoort projects bears witness to Dow, SENER, TSK and Acciona’s track record and to their willingness to work together in the quest for efficiency and excellence,” declared Carlos López, General Director of ACCIONA Engineering.
“Working with suppliers like Dow, with a capacity to provide a worldwide service, is fundamental for turnkey contracts in solar-thermal plants where SENER has been involved in more than 25 such projects, supplying proprietary technology such as SENERtrough® parabolic troughs,” stated Ernesto Álvarez, Power and Process Business Development Manager of SENER. “Technology from SENER, Acciona and TSK, as well as Dow’s heat transfer fluid, will ensure the efficiency required by these two plants”.
“In TSK we have always given top priority to values such as commitment, reliability and quality when choosing our main suppliers,” affirmed Oscar Rodríguez Acinas, Purchasing Director of the Energy and Industrial Plants Division of TSK. “We have maintained a close relationship with Dow since we began working in the solar thermal world and consider Dow to be a direct collaborator in our CSP projects.”
“With advanced technology providing the high-purity transfer fluid of the market, world-scale production capacity and tailored supply chain and logistics capabilities, Dow is devoted to be the best partner to support CSP customers’ success and the industry’s growth at long-term”, acknowledged Carolina Barrios, Marketing Manager for Dow Heat Transfer Fluids. 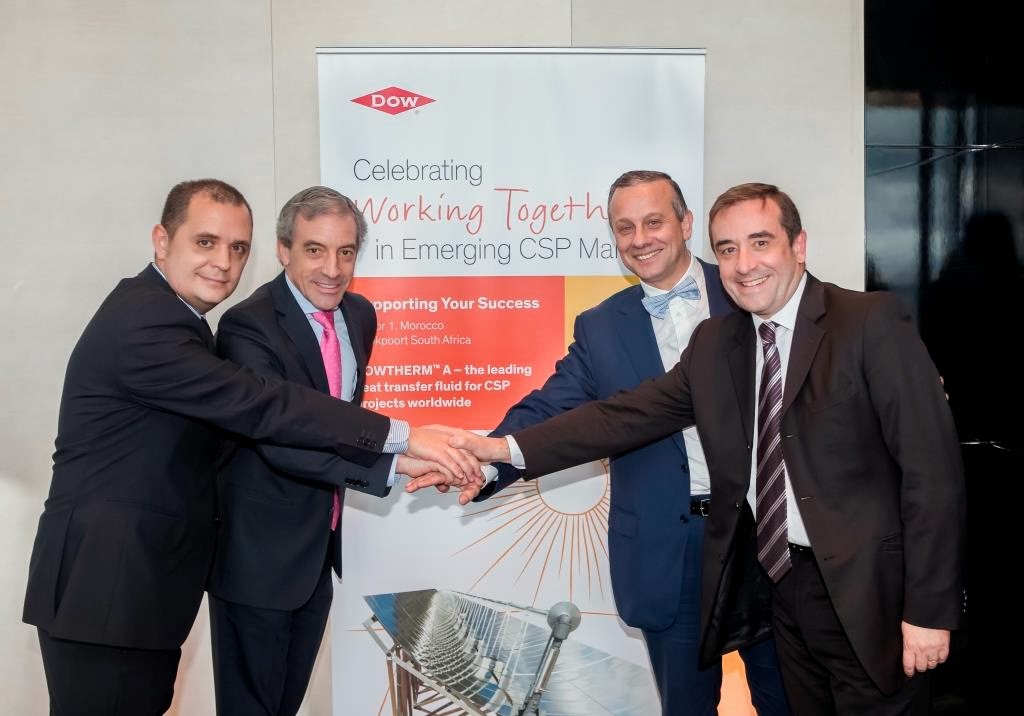 From left to right: Oscar Rodríguez Acinas (TSK), Félix Rivas Anoro* (Acciona), Ernesto Álvarez (Sener) y Juan Antonio Merino (Dow)
Noor 1 is the first CSP project of this kind in Morocco and the initial plant of 6 from the Moroccan solar plans defined by the Moroccan Agency for Solar Energy (Masen). The 160 megawatt plant will have 3 hours of storage. The Noor 1 complex is set to develop into a 500 megawatt solar park, incorporating several utility-scale solar power plants using various solar technologies.
Bokpoort will have a net generation capacity of 50 megawatt with 9 hours of thermal energy storage and is part of the second round of the South African Renewable Energy Independent Power Producer Procurement Program. Once completed, it will be the CSP power plant with the longest amount of thermal storage in the world.
Construction on Noor 1 and Bokpoort have begun, with both plants planned to go live in the second half of 2015.
https://www.evwind.es/2014/01/31/dow-acciona-sener-and-tsk-bring-global-concentrated-solar-power-csp-leadership-to-industry%C2%B4s-developing-markets/42609
http://www.helioscsp.com/noticia.php?id_not=2272
Concentrated Solar Power, Concentrating Solar Power, CSP, Concentrated Solar Thermal Power, solar power, solar energy, Dow, Acciona, SENER, TSK,